Control Your Home With Voice Alone From Your Phone!

This post comes to us from Ted Rosenberger, Founder & CEO of HouseLogix, creator of VoicePod Mobile.

When Apple unveiled Siri for the iPhone 4S in 2011, the world changed. While decent voice recognition technology had been available for decades, Siri was the first service to integrate powerful speech-driven information retrieval and control functions into the core user experience of a mainstream mobile device.

Siri certainly has had its problems and issues, some of which have become the target ofSaturdayNight Live skits and entertaining Microsoft commercials. But in spite of its occasional hiccups, tens of millions of people, including myself, use Siri every day. Why? Because for certain tasks, there is no doubt that Siri gets the job done faster and with less effort than any other option. It's also less distracting and more pleasurable to speak into your phone than to peck away at its small screen. With Siri, if you want to find the nearest Target store and navigate to it, you hold the home button down and say "navigate to the nearest target store". In a few seconds, you'reon your way. Finding the store without Siri would involve a lot of “browsing and pasting” with your head buried in your phone.

For the last 4 years, my company has been creating novel voice control solutions for home automation. Our first VoicePod product was a small tabletop device that offers a nifty alternative to touching physical buttons. You simply say "Hello VoicePod" in any room with a VoicePod in it and then speak a simple command like "good morning", "turn on lights", "raise temperature", or "TV Channel, ESPN". VoicePod tells the Control4 system what you said and immediately handles your request. VoicePod can be used effectively from as far as 30 feet away in a quiet room. It recognizes a small number of simple commands spoken by a wide range of people and even understands Spanish.

As a follow on to our tabletop VoicePod, at CEDIA 2013 we just launched a groundbreaking new app version of VoicePod called VoicePod Mobile. This iOS app makes use of advanced speech technologies in the Internet cloud, merging VoicePod’s home control capabilities with the ability to speak naturally – it’s like Siri for home automation. VoicePod Mobile adds intelligence and “automation awareness” to Google's renowned speech engine. It uses the iPhone’s built-in noise cancellation so it works extremely well, even at a party or with music blaring. Once set up by your Control4 dealer, VoicePod Mobile not only knows the name of each room in your house, but it also knows which voice controllable functions are available within each room. You speak into your iPhone or iPad, and your Control4 system responds to your requests like magic! Because VoicePod Mobile lets you include a room’s name in any command, the app literally puts every function throughout your home a single voice command away.

Consider some of example speech commands below. VoicePod Mobile will instantly handle any of these while you are lying in bed, sitting at the dinner table, or lounging on the couch. Imagine how much effort it would be to do these same functions "the old fashioned way" using your remote, touch screen or mobile app

"Set the temperature to 72 degrees in the kitchen"

"I would like to watch CNBC in the bedroom"

"What is the room temperature?"

"Put the pool waterfalls on." 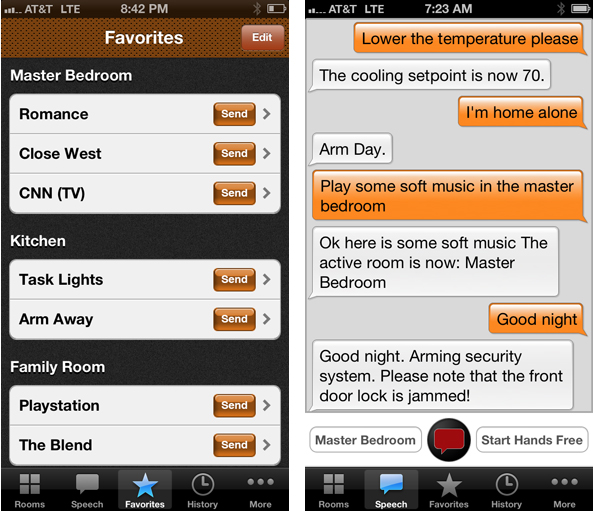 VoicePod Mobile understands hundreds of command phrases out of the box. Google tells VoicePod what you said and VoicePod figures out what you mean within the context of your house. Even better, right within the app you can define your own custom voice commands that let you use the same words your family uses everyday to control your home. Think "turn on Jane's lamp", "set up guys night" and "good night with guests in the house". The possibilities are endless— you speak to your house like a new member of the family! If VoicePod Mobile is ever not sure about what you want, it confirms with you before acting.

Here's a link to a video that shows VoicePod mobile in action. The app is a free download on the Apple Store (Android app coming in November). Out of the box, the app connects to a Control4 demonstration system on the internet so why don't you install it now and give it a whirl? When you are ready to connect the app to your own home, contact your Control4 dealer to set it up. I predict your entire family will use VoicePod Mobile every day and you will be even more pleased with the investment you have made in Control4! And, yes, VoicePod Mobile can indeed “open the pod bay door” (as long as it has a Baldwin or Yale smart lock)!
Previous
Next