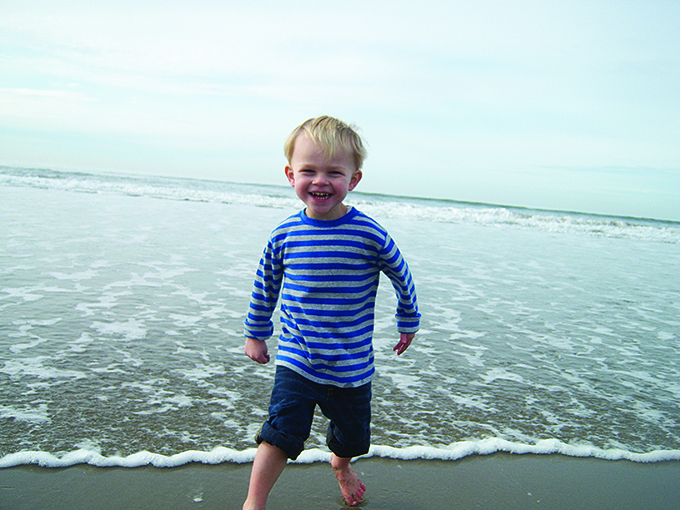 Move over, meltdowns! And good morning, Sacramento! The Buzzard family has it all under perfect control.

The precipitous increase in autism continues to baffle experts. Despite millions of dollars in research—the National Institute of Health alone will spend $99 million on autism research this year—we have yet to determine how it can be prevented or what catalyzed its sudden and dramatic rise. In the meantime, technology is playing a powerful role in enabling those who have the disorder, particularly young children.

This was not lost on Control4 dealer Mark Buzzard, whose son Brody has autism. “My home is like a mad scientist experiment,” he laughs about his country home in Sacramento, California.

With personal experience with both a child who has autism and what home automation is capable of, Mark engineered his house to make everyday life with three and-a-half-year-old Brody a little easier. One-touch buttons and preprogrammed scenes do everything from help him start his day with a smile, engage harmoniously with his therapist and one creative application has even helped curb a new development of Brody leaving the house unannounced.

“I’ve seen many implementations of our products,” says Control4 sales manager Mike Woods. “But the way Mark uses the system for his son is the most inspiring and thoughtful use case I’ve ever seen.”

Brody was born with autism as well as apraxia, a speech disorder that makes it difficult for him to articulate what he wants. Consistency and established cues are vital to his routine; any disruption or change to that routine come at him like an emotional curveball.

When Brody started pre-school this year, the earlier wake-up time proved to cause what the Buzzard family calls “meltdowns.” “It was a nightmare,” recalls his father. “He would throw a fit. He would throw his binky on the floor. His face would turn red; tears would stream down his face. He would slam his head against the floor and almost injure himself. As a parent you learn patience, but this almost brought us to a breaking point.”

Three months later, the scene is totally different. Mark activated the Control4 feature Wakeup Agent, which programs things such as lighting and music to turn on at certain times. Now, at exactly the same time every day, Brody is gently roused by his favorite cartoon, Thomas the Train.

“He loves it,” says Mark. “When he wakes up in the morning, he wants to stay cozy. Thomas the Train gradually wakes him up and lets him do that. It helps him feel ready for the day at his own pace.”

Likewise, Brody can fall asleep to his favorite TV shows. Mark has it set up so that he can remotely turn off the television and the lights in his son’s room so it’s not necessary to enter and exit his room. Additionally, Mark set up the Control4 system to run playlists in the therapy room so his therapist can interact with Brody through his favorite music and songs.

Susan Stokes, a researcher and autism consultant working for the Wisconsin Department of Public Instruction, believes strongly that “Various types of technology, from ‘low’ tech to ‘high’ tech, should be incorporated into every aspect of daily living in order to improve the functional capabilities of children with autism.”

Along with a TV, Mark made an iPad available in a dock at Brody’s height, so he can take it anywhere with him in the house. Mark’s vision is to have a visual cue of each of Brody’s routines—bath time, play time, outside time, haircut time, etc—to run on either the TV or the iPad possibly accompanied with text. This would help Brody both prepare for that activity and transition into it.

Typically, children with autism have an easier time processing visual information than auditory information. This makes cartoons on a television or visual prompts on an iPad a powerful tool, as it informs them through their strongest processing area. “Communicating with speech is hard for Brody and he can’t read emotion,” explains Mark. “He sees the world visually and literally.”

SAFETY, SECURITY, AND SNEAKING OUT

Recently, the home security system alerted Mark that the front door of the house had been opened. What he discovered would keep him up at night. Brody, for the first time, had managed to unlock both his bedroom door and the front door, letting himself out of the house—something many toddlers eventually learn to do, but Brody is more stealthy than others. “That really scared me,” recalls Mark. “He’s smart; he knows how to unlock doors, and his room is on the other side of the house.”

In short order, Mark set the Control4 system up with time parameters, motion sensors, and speakers in every room. He integrated an IP camera in Brody’s room so that he and his wife could monitor Brody’s playtime and therapy sessions. Now, if Brody tries to sneak out of his room or the house, Control4 sends email and text alerts to his parents, and activates a whole-house audio announcement: “Brody has left the building!”

“I have total peace of mind now,” says Mark.

It’s commonly believed that some of our greatest minds and contributors to society were people with autism, including Einstein, Van Gogh and Mozart.

While their predecessors may have used the piano, the paintbrush, and physics, for children with autism growing up today, technologies such as the iPad are significant game-changers.

“So many individuals with autism who struggle with verbal communication are able to open up new doors to social interaction when they are able to use tools such as touch applications,” explained David Canora, principal technology specialist at Walt Disney Parks and Resorts, and chairman of Quest Inc., who is also father of a son with autism. “Parents are always looking for new strategies to engage their children with the people and world around them and technology has so much potential to do that.”

Mark’s latest vision for his company, Liberty Bell Alarm & Home Theater, is to create an app for Control4 systems that emulates the iPod/iPad version of iPrompts from HandHold Adaptive, which use visual prompting templates to help the user transition from one activity to the next, make decisions, be ready for the next task and focus on the current one.

To that end, Mark sent Liberty’s top programmer to a Control4 developers’ conference to coordinate efforts with the latest software release and Flash architecture. He’s currently working on getting the coding to work. He admits it’s hard, but he’s determined.

“For so long I thought, ‘I have to fix him,’” says Mark of his son. “And I didn’t accept that he was different and not typical. Now, I recognize that he is unique and has unique gifts. He just has different needs for developing them and expressing them.”

Mark pauses for a moment before adding, “Children with autism have such a narrow focus. I know Brody is going to grow up to just be so smart,” says Mark. “Whether he’s an artist or a Google programmer, he’s going to be an amazing adult. And as our child, he’s already a perfectly amazing gift just the way he is.”