Securing Your Home (and Home Away from Home) with Control4

This editorial is written by Dennis Burger, Editor in Chief at HomeTechTell and contributing writer at Residential Systems.

Those of us in the business of writing about—and living with—home control systems tend to tout the at-home experience above all else. That is to say that most discussions about home automation, Control4 included, focus on the way it enhances our day-to-day lifestyles at home, in the home, while we’re home, by simplifying the operation of entertainment, lighting, comfort control, and so forth. That focus makes sense, of course, given that you’re not likely going to want to fire up your music system or adjust your thermostat at the touch of a button unless you’re actually at home, or on your way there.

But one of the most important lessons I’ve learned in the months that I’ve lived with a Control4 system in my own home is that touch-of-a-button control—as cool as it may be—isn’t really the neatest of Control4’s capabilities. The system’s real strength lies in its interconnectedness: the way it ties the various subsystems of your home together, so, for example, your lights are capable of communicating with your home theater, your window shades know whether the thermostat is heating or cooling, and every connected device in your home knows the time of day, the day of the week, and whether or not Jupiter is rising in Aquarius, if you’re into that sort of thing.

Add a home security system into that equation and you can see how a smart, connected home is a more secure home—or vacation home—whether you’re there or not. Most modern alarm systems from manufacturers like GE, Honeywell, and DSC are capable of full two-way communication with Control4, which means that not only is every contact, window break detector and motion sensor in your security system now accessible by your home automation system, but all of the other connected devices in your home can now send commands to your alarm system as well. In other words, you’ll no longer have to stress over the frantic dash from your security panel to the front door after you’ve armed your alarm; instead, you could just as easily double-tap the light switch by the front door to execute a macro that waits thirty seconds and arms the system for you once you’re comfortably out the front door. 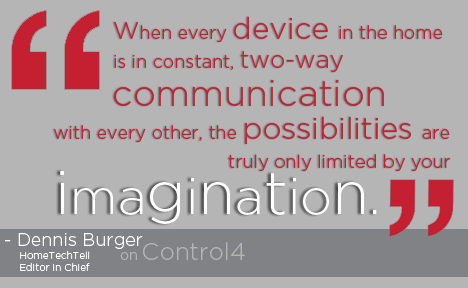 That’s assuming, of course, that you can count on the last person out the door to remember to double-tap a light switch. If not, though, don’t worry; you could even pass off the task of arming your alarm system to a particular Control4 lighting scene—“Away,” for example—and activate that scene at the touch of a button whether you’re halfway out the door or halfway to the airport via the Control4 MyHome app on your mobile device. When every device in the home is in constant, two-way communication with every other, the possibilities are truly only limited by your imagination.

Speaking of imagination, there are oodles of ways your Control4 system can creatively contribute to a more secure home—or home away from home—even without the help of a security system. You’ve no doubt heard the term “mockupancy” before, which involves making your home look occupied even when it’s not. With Control4 in place, you can up the believability of your home’s mock-occupied state by creating more sophisticated automated lighting scenes. One program designed to do just that is Always@Home, a Control4 driver that constantly observes your usual lighting and entertainment usage over the course of two weeks, then recreates those patterns when you’re away. You can even choose which lights—and even which TVs—to record and play back, and if you’re energy conscious, you can limit the brightness of your mockupied lights, so they illuminate just enough to dupe would-be intruders.

Motion sensors are another way of giving your home that lived-in look, but getting the most from them might require a bit of creative thinking. Their most obvious implementation would be to trigger exterior lights when a potential intruder is sneaking around outside. But that’s too obvious. It might make a burglar squint a bit, but it certainly won’t fool anyone into thinking you’re home. Instead, why not tie those motion sensors turn on the nearest interior light after, say, a ten second delay?

Smart locks like Yale’s deadbolts are another wonderful way of adding some truly creative security solutions to your primary or secondary residence when you’re away. There are, of course, the obvious uses for intelligent, connected locks—like giving your cleaning company or contractor time-and-date-limited access to your home without giving up a spare key (or the pass code for your security system). You can even set up text message alerts to notify you when regularly scheduled service people arrive, and fire up the Control4 MyHome app to keep an eye on IP-connected security cameras around the home while they’re there, if you have reason to be suspicious.

But again, it’s the potential for near limitless interconnectedness that excites me the most. Imagine your mockupancy measures have failed, and a would-be intruder has figured out that you’re not home. Yale’s locks have some really amazing features buried deep in the menus, which you can easily tap into with a Control4 system. For example, the locks can alert your system to the fact that an incorrect entry code has been entered two, three, four, or however many times you choose. It can also send a cry for help to your Control4 home controller if someone is physically tampering with the lock itself. When alerted to either of these events, your Control4 system could fire up your outdoor music system and play a pre-recorded message—perhaps a warning that any further attempts will result in a call to the police.

Or, if you have a really twisted sense of humor, you could load up an audio recording of that ominous scene from RoboCop, where the gigantic, maniacal security robot ED-209 bellows out, “You have five seconds to comply—four, three, two, one...” before unleashing a torrent of gunfire.

Granted, you’ll know there’s not a massive renegade law enforcement droid protecting your premises, and any would-be interloper might strongly suspect as much, but it’s a safe bet he’ll be taking his stained delicates to the laundromat instead of taking his chances with any further unforeseen security measures of your smart, protected home.
Previous
Next