Automation in a Winter Wonderland 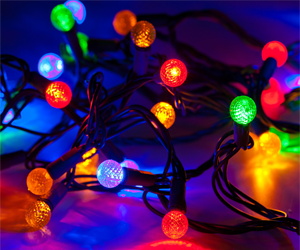 Last week I decided it was time to put up my lights for the holiday season. (To be honest, my wife actually did the deciding. She decided and I executed. That's the way it works at our house.) Since my home seems to get smarter and smarter with each passing month, it just made sense for me to tie my lights in to my Control4 system.

My older son and I placed the lights on Saturday afternoon. I made the discovery—as I lay upside-down on my roof with my teenaged boy holding onto my feet so I wouldn't slide off and break my neck—that I probably need to get a longer extension ladder one of these days. Thirteen feet just isn't tall enough. But no matter. We hung lights on the gables and gutters, wrapped the two Italian cypress trees that flank our porch steps, and set out what my kids  like to call "Santa's Runway." We have six sets of these giant bulbs that mount on short rods stuck into the ground, and they look like runway lights if you place them on either side of a sidewalk.

Once all of the lights were set up, it was time to automate. My son asked me if I was going to choreograph the lights to music, but that's really outside the scope of what you can currently do with a Control4 system. One of my big hassles every Christmastime is having to remember to turn the lights on and off. So I simply programmed them to come on every evening at sundown, and to go off every night at midnight. That means no more accidentally leaving all those lights burning all night. Hooray! For good measure, I also programmed in an "expiration date" so the on-off program will automatically stop on January 2. One less thing to worry about.

As I was getting everything configured, my daughter asked me where I was going to make our lights blink like our neighbors' lights do. I have this annoying neighbor with an annoying light display that blinks annoyingly all night. Luckily, he tends to forget to turn them on, so at least there are a few nights every week when we don't have to endure the blinking in our front room. As a tribute to him, I decided to program Santa's Runway to blink 5 times every 15 minutes. I told myself it's like church bell chimes counting off the quarter hour, but I have to admit it's really just my passive-aggressive way to annoy my neighbor back just a little. My kids sat in the front room and watched the lights for a couple of hours the first night they came on. They got really jazzed up when the quarter-hour blinking went off like ... well, like clockwork.

One day I would love to have one of those fully choreographed displays—you know, the kind of house that always has a line of cars around the block in the days leading up to Christmas. It isn't going to happen this year, but I thought it was worth looking into what I would need to actually make that happen. As it turns out, there are some products and technologies that you've probably not heard of, but are essential to putting together a killer Christmas light show.

DMX
We're not talking rappers here—we're talking a communications protocol specifically created for lighting control. It's mostly used by theatrical lighting technicians and DJs to control lights onstage and in nightclubs. There are lots of DMX controllers out there, some with just a few lighting channels and others with dozens. Some of the more popular systems for holiday displays include Light-O-Rama and Lynx.

Vixen
This is an open-source (free and community-supported) software program that allows do-it-yourselfers to interface with a DMX controller to sequence lights with music. It's specifically for Christmas lights, and because it's open-source software it doesn't cost a dime. You can download it and tinker with it and there are several plug-ins to allow the software to communication with various controllers and commercial systems.

Light-O-Rama
This company makes commercial software and hardware packages that make it easier to accomplish what a DIY-er could manage with Vixen and DMX. Though the systems aren't simple, they require much less technical know-how than a home-brewed system, which means they would be much easier to use. Be sure to take a look at their Showcase page if you visit their website. Some of the displays are phenomenal.

Well, there you go. Maybe you're like me, and simply want to automate your holiday lights so you don't have to turn them on and off every night. Or maybe you've got more ambitious plans for a fully sequenced music and light show next Christmastime. Either way, you now have the tools to go and make it happen.