THE MIDDLE OF A PANDEMIC MIGHT NOT SEEM THE BEST TIME TO OPEN A 42,000 SQ. FT. SEAFRONT RESTAURANT COMPLEX, BUT SAN DIEGO’S SPECTACULAR PORTSIDE PIER HAS THE SMARTS—AND THE COMMUNITY SUPPORT—TO WEATHER THE STORM.
The Brigantine restaurant chain is something of a San Diego institution. In 1969, Mike Morton Sr. and his wife Barbara opened the original “Brig” on the eastern side of Point Loma by San Diego Bay. With its late-night opening, hearty home-style cooking, and warm family welcome, it quickly became a go-to spot for locals. As time went on, the Brigantine began to expand to more locations, building a solid reputation for fine, fresh seafood—its swordfish and oysters among the chain’s signature fare. By 2014, the family business—now headed up by Mike and Barbara’s son Mike Morton Jr.—employed 1,200 people and included eight Brigantines plus a second chain of five Mexican- themed restaurants, Miguel’s Cocina. In 2015 the Port of San Diego invited proposals for the redevelopment of prime waterfront property on the Embarcadero in the bustling Downtown area of San Diego. The location is a testament to the region's colorful maritime history. It sits beside the 150-year-old merchant ship Star of India (now a floating museum), as well as overlooking a working fishing harbor and a cruise ship terminal.

THE STATE-OF-THE-ART DESTINATION WAS GOING TO REQUIRE STATE-OF-THE-ART SMART TECH.
Since 1965 the site had been home to another popular local seafood restaurant, Anthony’s Fish Grotto, whose lease was due to expire in 2017. The Port wanted to modernize the area as part of a wider redevelopment of the San Diego waterfront, and the Brigantine was determined to wow them with something truly spectacular. A nail-biting contest for the property ensued, with the Brigantine, Anthony’s, and a third local restaurant group all making the final shortlist. But the Brig’s ambitious $13 million plan for Portside Pier won the day—a breathtaking, multi-level restaurant complex, designed by San Diego architects Tucker Sadler, which would include several restaurants, a public viewing gallery, and waterside “dock-and-dine” berths to attract seafaring clientele.

Once the proposal was accepted, Mike Morton Jr. brought in Control4 Smart Home Professional Jared Magoon of AV-ators, a local smart tech specialist that he’d been working with since 2009, to help spec out what was needed. The state-of-the-art destination was going to require state-of-the-art smart tech to ensure restaurant staff could get on with the business of serving customers without having to worry about the intricacies of lighting, heating, music, and screens.

SMOOTH SAILING THROUGH CHOPPY WATERS
Although the Port announced the bid winner in November 2015, construction of the new Portside Pier development couldn’t begin until the Anthony’s lease expired in 2017. Jared says, “Building work didn’t start until May 2018. Before that, the old restaurant had to be torn down, the sea floor had to be tested, various environmental reports had to be produced, and pier supports had to be replaced and strengthened.” The Mortons had already built up a high level of trust with AV-ators and when Mike Morton Jr. introduced Jared to the other contractors, he told them “Anything he needs, let it happen.” “That trusting relationship was key to ensuring that the project ran smoothly,” says Jared.

Construction proceeded apace and by the time the pandemic hit in March 2020, the building was largely complete, and AV-ators’ three-man team had installed around 20 miles of cabling to control all the smart tech. “From that point, only a limited number of people were allowed on site. Each morning, everyone had to have their temperature scanned, answer various questions, and obtain a wristband to enter. Once a week, the foreman did a presentation to run through the latest instructions regarding sanitizing, wearing masks, gloves, and so on, which were constantly changing,” says Jared.

Far from slowing things down, he says because there were fewer people allowed on site than normal, AV-ators’ work was actually more straightforward since they weren’t constantly having to work around lots of other contractors. “Bizarrely, COVID actually worked in our favor,” says Jared. “As well as giving us more space to work, it also gave us more time to focus exclusively on the project. We typically do a lot of residential work, and since people didn’t want anyone working in their houses during the COVID threat, that allowed us to focus exclusively on Portside Pier, which sped things up.”

The finished complex, which opened in July 2020, oozes quality and modernity, while deftly fitting in with the area’s maritime heritage. The central arching element of Portside Pier symbolizes the casting of a fisherman’s net into a wave, while the steel and glass dome-like structures at either end resemble giant fishing baskets. 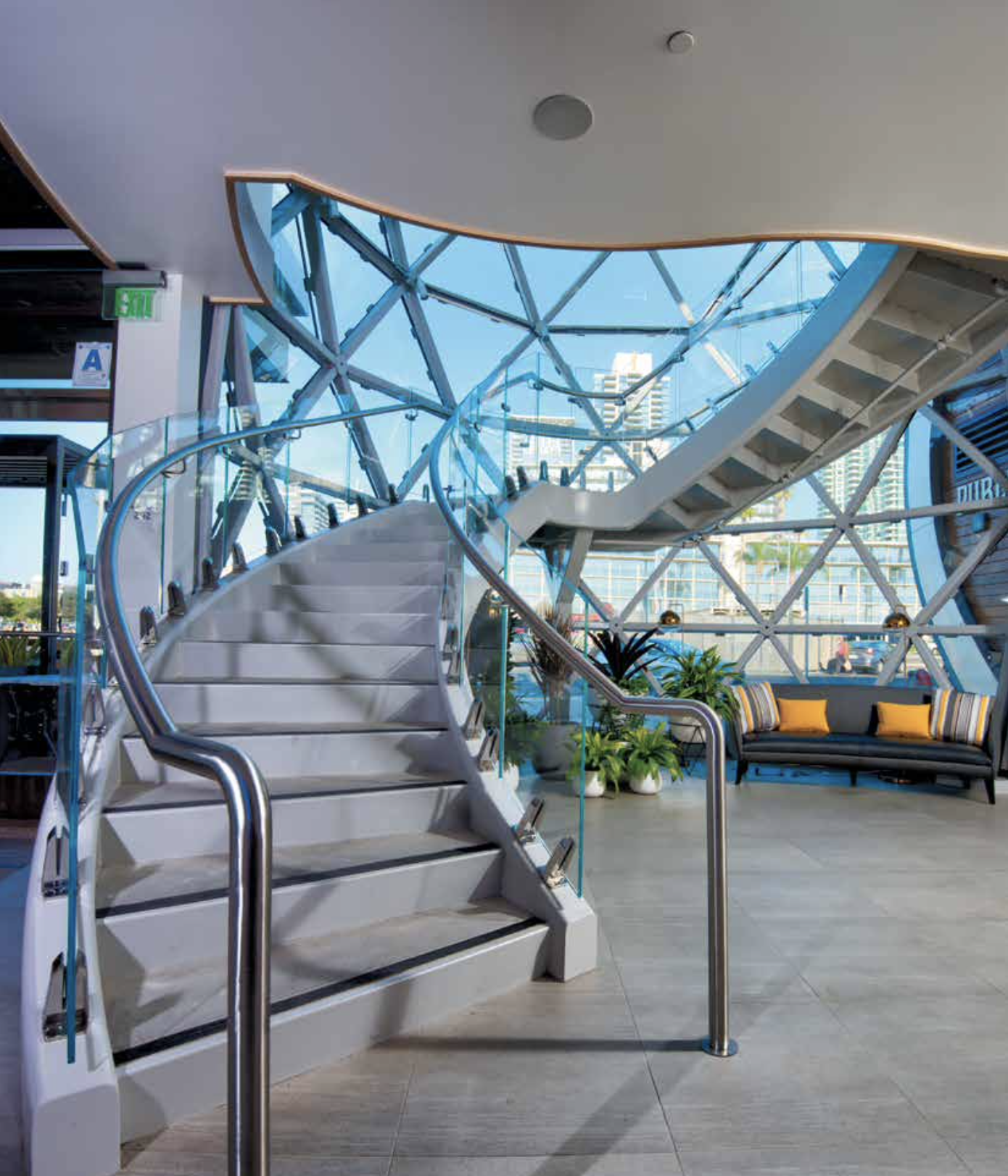 The central arching element of Portside Pier symbolizes the casting of a fisherman's net into a wave, while the steel and glass dome-like structures at either end resemble giant fishing baskets.

There are five eateries in total, all owned and run by the Mortons: The Brigantine for seafood, Miguel’s for Mexican, Ketch Grill and Taps for pub-style food and craft beer, Topsail for open-air rooftop dining, and Portside Coffee and Gelato for quick snacks and drinks. Although all the restaurants have separate entrances and identities, the smart tech is integrated throughout the building. Lighting, heating, air conditioning, music, screens, digital signage, and security systems can all be fully programmed and controlled, both for individual outlets and for the Portside Pier complex as a whole. Because Control4 technology is supplier-agnostic, it integrates seamlessly with all the best-of-breed kit selected for the project, such as the Samsung TVs, LG digital signage boards, and Yamaha amps throughout the complex.

As well as compatibility and usability, Jared says his main reason for favoring Control4 over rival systems is the price. “It reliably does everything we want, while still being 20-30% cheaper than any of the alternatives,” he says. It’s also remarkably easy to use, meaning there’s no steep learning curve for new staff. “Since Control4 smart tech is already well established in the family’s other restaurants, the business can move people among outlets as needed, safe in the knowledge they won’t have to get to grips with any tricky or unfamiliar processes,” says Jared.

SUSTAINABLY SMART
Much of AV-ators’ time was spent programming the various scenes that automate everything to ease life for the restaurants’ managers and staff—freeing them up to focus on the core business of ensuring a top-notch experience for customers. He explains, “When the cleaning crew arrives at 3 am, as soon as they disable the alarm, the lights automatically turn on at the required brightness. When Portside Coffee and Gelato opens at 5.30 am, the lights dim to a lower level and the music starts. At 10 am, the first morning scene kicks off and throughout the day all the pre-programmed scenes adjust based on exterior light levels. At dinner time, there’s a twilight scene that imperceptibly brings up the lights as the sun sets.”

When the restaurant staff leave at night and arm the alarm, all the music and screens shut off automatically, and the system makes sure all the electric heaters are off. “The interior lights go off, but the exterior lights stay on for a few minutes to give staff time to get to their cars and load up,” says Jared. Altogether, there are 10 or 12 scenes throughout the day. Easily selectable sports scenes also make it simple to change all the TVs to the local San Diego Padres baseball game or another sporting event that might draw in customers.

Jared says the most challenging aspect of the project was ensuring Portside Pier was compliant with California’s rigorous Title 24 regulations on energy efficiency. Among other things, these stipulate that external daylight must be used to light interiors where possible, and all new commercial buildings must include a means to reduce energy use on-demand if regulators ever require them to do so, for example, during an energy shortage or crisis. “We had to learn all aspects of the requirements and program the system to make sure we were not only meeting but exceeding, the standards. With a 40,000 square-foot restaurant complex, any energy-saving translates to a substantial financial saving,” Jared says.

The design of the complex means all the restaurants maximize the use of natural light. “When daylight goes above 30%, the system automatically turns off all the lights apart from a few decorative ones. In rooms and hallways without natural light, we have motion and occupancy sensors that turn lights to 20% when no one’s there and back up to a preset level of 50% when they detect someone,” says Jared. “And we have scenes ready to go which, for example, turn off half the lights should the restaurant suddenly be required to cut energy use in line with the Title 24 ‘demand response’ rules.” 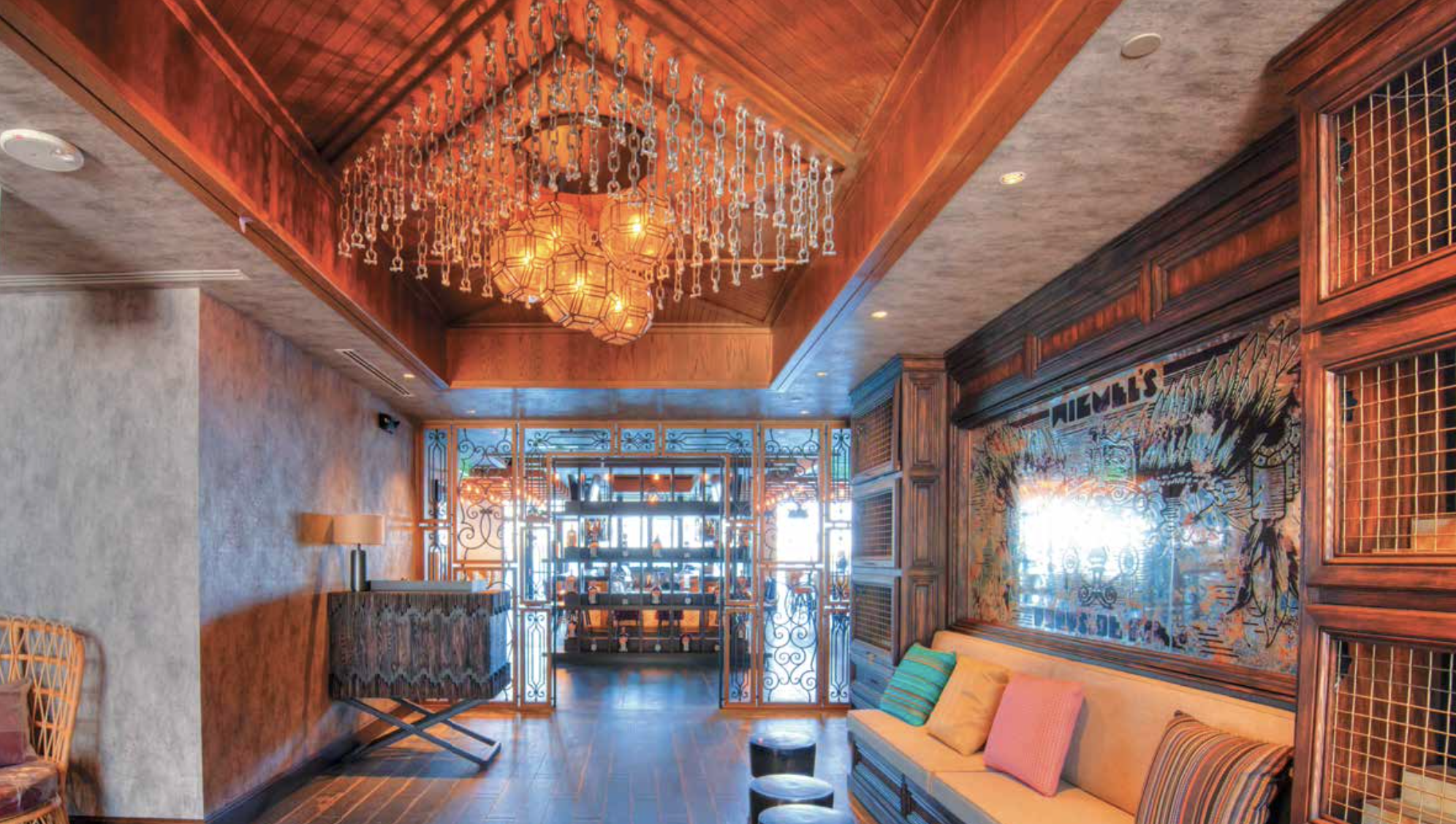 SAFE PASSAGE TO SUCCESS
Portside Pier is by far San Diego’s biggest restaurant destination, with 1,100 seats, 600 of them outdoors. Opening in the middle of a pandemic, when the hospitality sector faces unprecedented challenges that have already seen many businesses go to the wall, is hardly ideal, of course—particularly when the cruise ships (that the Port hoped would provide a steady stream of customers) remain, at the time of writing, at a standstill.

Nonetheless, Jared believes Portside Pier’s design and smart tech will enable it to succeed despite the current difficulties. “San Diego weather is beautiful most of the year, and every door and window at Portside Pier folds open, accordion-style, to give all the restaurants an alfresco feel,” he says. Lighting, heating, air conditioning, music, screens, digital signage, and security systems can all be fully programmed and controlled, both for individual outlets and for the Portside Pier complex as a whole.


Portside Pier is by far San Diego’s biggest restaurant destination, with 1,100 seats, 600 of them outdoors. Every door and window at Portside Pier folds open, accordion-style, to give all the restaurants an alfresco feel.

Portside Pier can serve almost 50% of normal occupancy in the outside space alone, and a further 25% inside with social distancing measures in place. The Control4 smart automation also means managing the large space is simple, even with a reduced staff. If anyone can weather the storm, says Magoon, it’s the Mortons. Locals and staff are all rooting for them. “They are the kindest people, well-known throughout San Diego for their generosity, honesty, and hard work,” he says. “For instance, in the final days before opening, Mike Morton Jr. drove up in an old family truck towing a trailer with dozens of tables and hundreds of chairs, which he and his brothers then proceeded to unload and set up. Despite running a sizable company, this family is willing to work hard and never put themselves above anyone.”

Thanks to The Brig’s loyal following, and the downtown location close to offices and shops, Portside Pier is already doing brisk business despite the lack of tourists. “Every day they open for lunch at 11 am, and by 10:30 am there are already 20-30 people outside. And on Friday and Saturday nights, there’s typically a three-hour wait to get into any of the restaurants,” says Magoon.

Long may they sail! ■

For more articles like this one, be sure to check out the latest Home Smart Home magazine here!

WANT TO LEARN MORE ABOUT CONTROL4? ENTER YOUR INFORMATION IN THE FORM BELOW!