As a Control4 employee with networking and technical training, I'm in the process of installing automation in my own home. I’m going bit by bit, starting with the “easy stuff.” I got a bunch of my lighting controls installed over the weekend, and we’re now starting to enjoy the benefits.

One of the challenges in our house is that our teenaged boys’ bedrooms are directly below the family room, where my wife and I spend much of our time. Eventually we’d like to put in an intercom system, but until then, we’ve basically had to yell pretty loudly to get any response out of them.

On Sunday night, I made a trip downstairs to tell the boys it was time for “lights out.” We sent our younger daughter to bed as well, and she was in bed almost immediately.

Almost half an hour later, we could still hear the boys chatting downstairs. I don’t know if this is a characteristic of our home or if it’s a quirk of the house itself, but we can hear them when they’re talking, but they can’t hear us unless we shout. Our boys are great friends and love to just sit and talk, like teenaged boys tend to do. Normally at this point either my wife or I would just scream, “GO TO BED,” but neither of us wanted to wake our daughter up.

Realizing that our newly installed automation system gave us some new options, my wife chose a quieter approach. She simply got out her iPhone and used the MyHome app to flash the lights in the boys’ bedrooms. Neither of us had any idea what the reaction would be. This was uncharted territory for all of us. 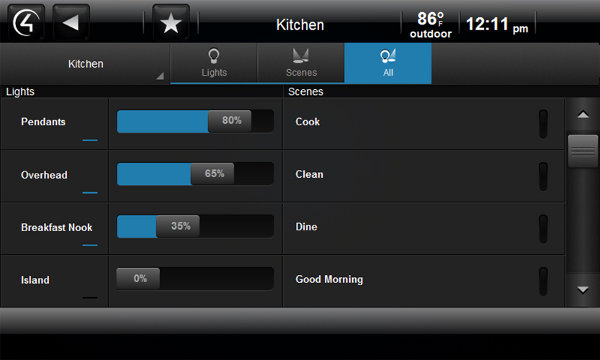 The talking downstairs turned to laughter, and then we heard our older son say, “OK, OK, we're going to bed.” We sat and watched the screen of my wife’s phone as first one son and then the other turned out his light. The boys were in bed—mission accomplished—with no yelling at all.It wasn’t earth-shattering, but it was a fun moment. And it gave us a preview of where automation will be taking our family as we get more and more of it in our lives.
Previous
Next