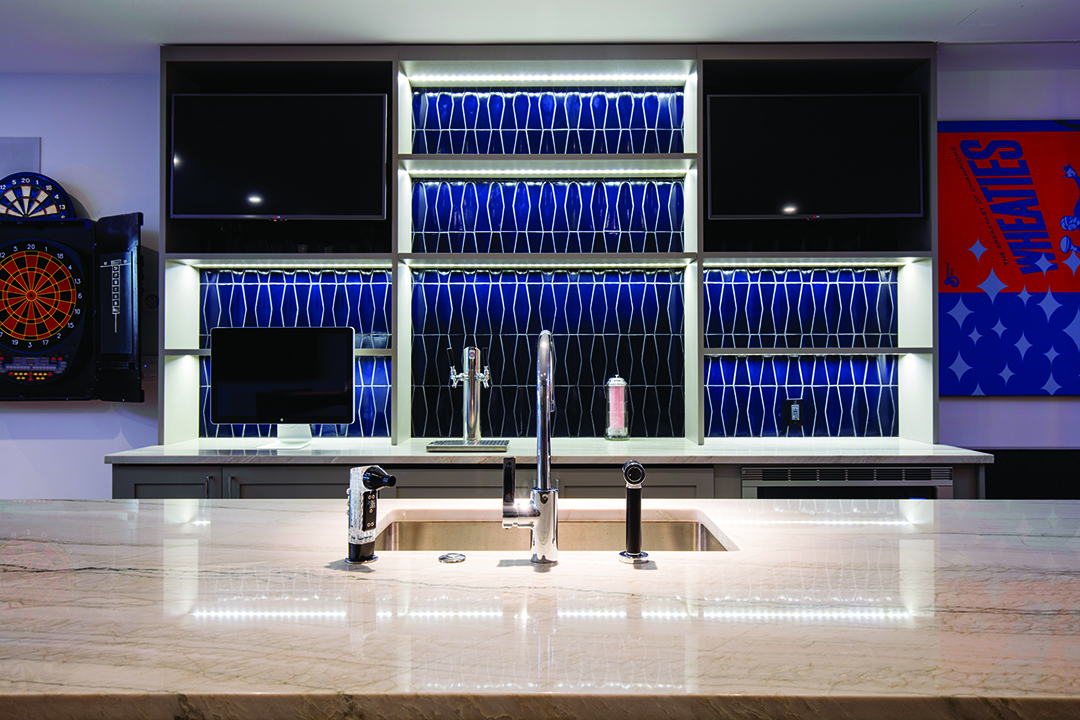 By Guest | Posted May 5, 2018
A New York City church becomes a smart home, with a surprise interior.

The old adage has never been truer: Don't judge a book by its cover. Case in point? This stunning New York City six-story townhouse. From the curb, this stately beauty in the Hell's Kitchen neighborhood exudes classic New York brownstone. But few passers-by know of this property's unusual past life -- or of what now lies behind the front doors. 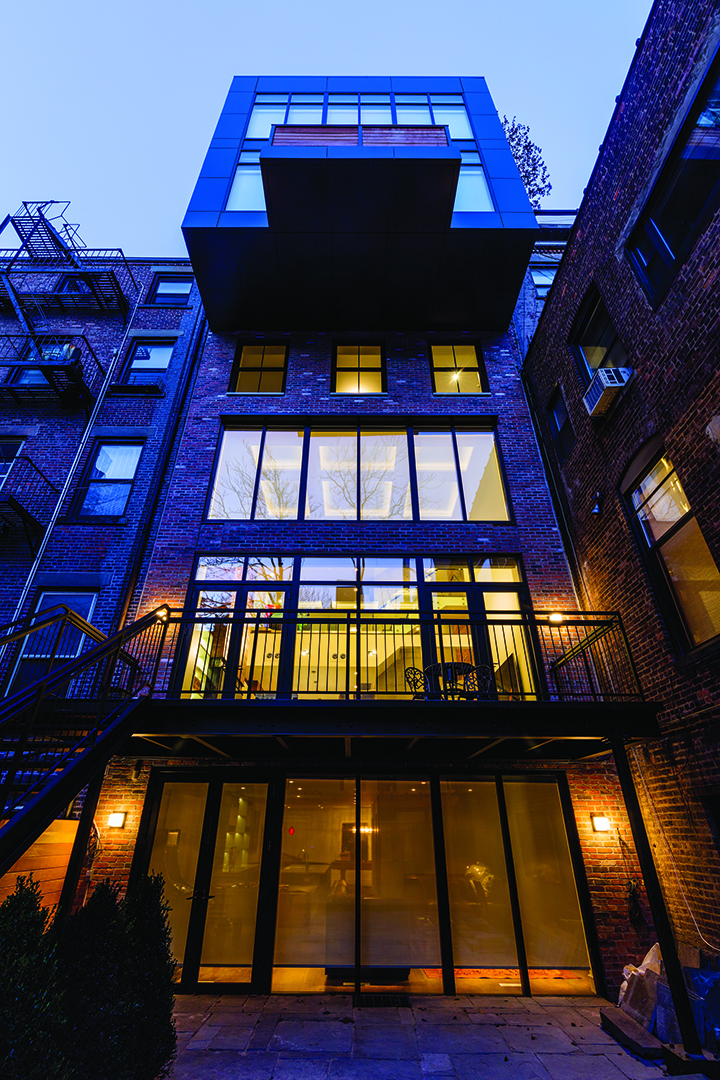 Before the current owner bought it, this property was actually part of a Catholic church called The Church of the Sacred Heart. The building served as the rectory, where the Brothers lived and studied to become priests. "My dream was to turn it into a single-family home," notes the owner, who wishes to remain anonymous. So, after purchasing the 110-year old building, he gutted it and designed the home he had always wanted for himself, his wife, and three sons. And, this owner's vision was an unusual one: He wanted to keep the exterior in the classic brownstone decor, but inside, he wanted a totally different look. "I wanted a classic facade outside, but when you walk in, you're in a modern loft." Outside: all New York; inside: all Miami. 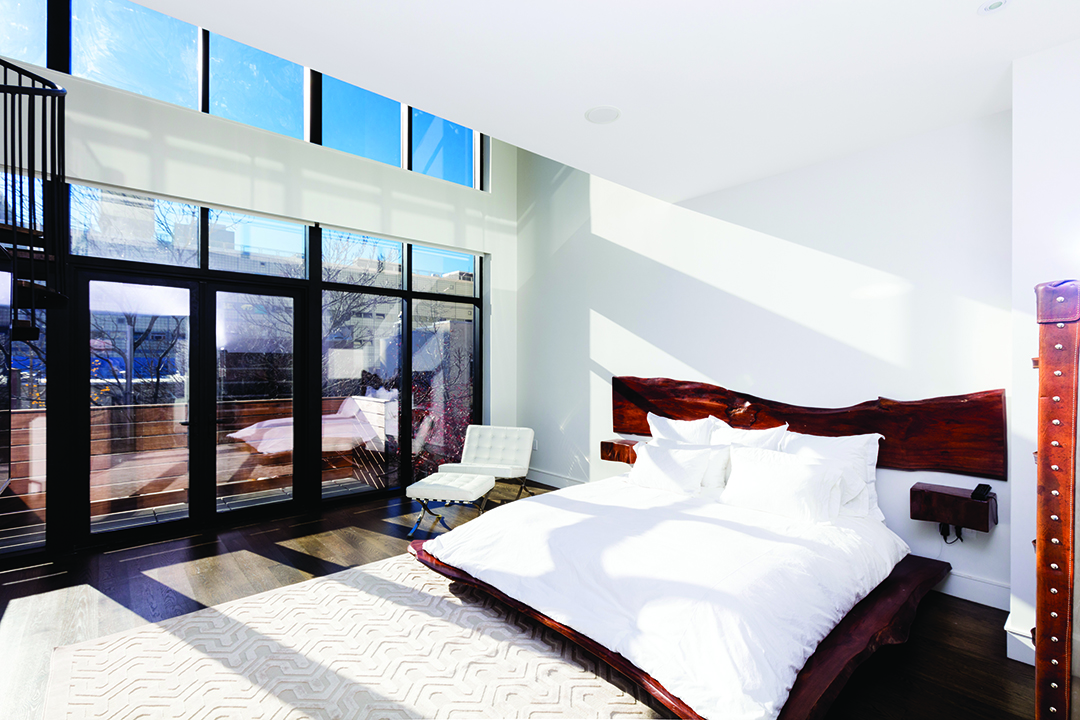 Having experienced the power of automation with a basic system at his Connecticut home, this owner knew his revamped city dwelling would be a smart home. "In such a vertical space, I knew automation was essential," he says. "When you're up on the sixth floor, and you left the radio on on the first floor, it's no fun." So, he enlisted Stephen Kraus and team at Kraus Hi-Tech Home Automation for the install. This is a group that knows automation-they did all 400 rooms at Trump SoHo, the first fully-automated hotel in New York City. At the onset, the plan for the new home system was fairly elementary, just lighting in the staircase and common areas. "But, as the owner learned more about what automation could do, we were able to pinpoint a design for him," Stephen notes. And to realize the vision of the modern interior, the owner knew high-tech would help. "There's no way you can recreate that modern look without integrating it with the modern conveniences of technology," he explains. 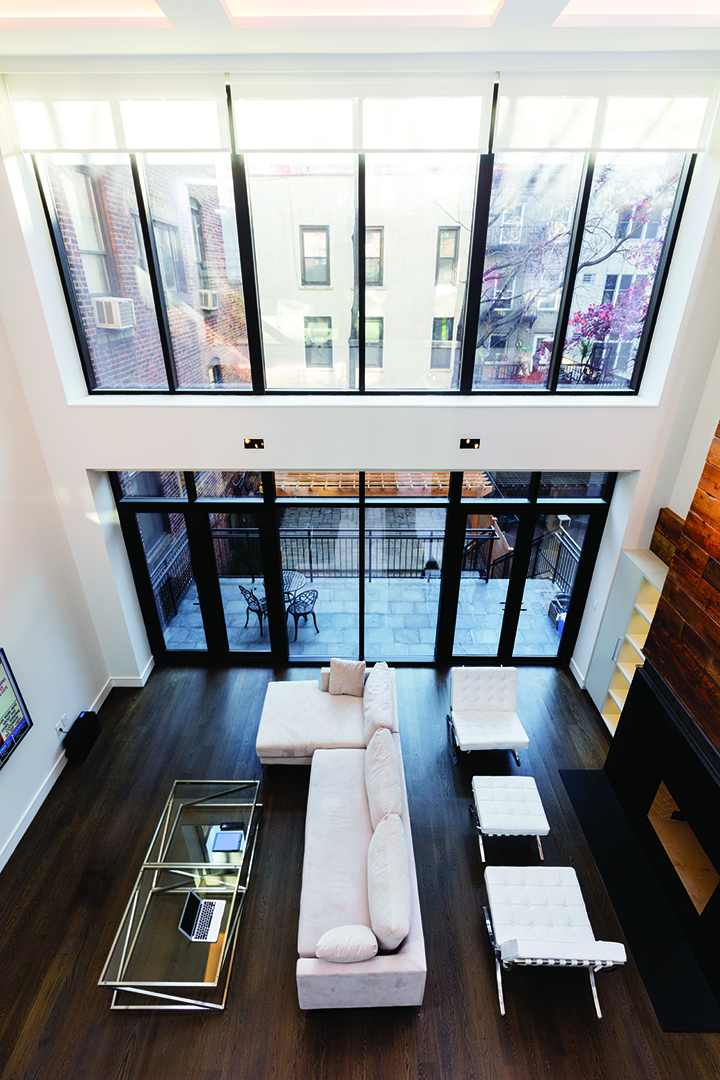 The owner and installer both agreed that Control4 made the most sense to power the system. The owner has a different brand of automation in his Connecticut home, one that has limited his options because only the native brand of components will work on the system. "I was stuck with this 'gated community' style vendor," the owner notes. "Control4 offers a more open platform. It was a flexible, and a cost-effective solution." The Kraus team concurred. "It was really a matter of value," Stephen says. "Even though the Control4 control equipment is robust and feature-laden, it's less expensive, so you can spend more money where it matters... on the displays, speakers, on the stuff you're controlling rather than the control of it."

And so, together with an architect, the owner and the installer transformed the former rectory into a future-forward, 8,000-square-foot family home. Some floors were partially removed to create ultra-vaulted ceilings. "We enjoyed the owner's participation very much in the design process," Stephen notes. The look is sleek and modern, and it's laden with smart features. The system includes lighting, distributed video, 15 audio zones, HVAC integration, two door stations, two Wireless Music Bridges, motion sensors, and hi-tech goodies on each floor.

"The finished place is gorgeous," Stephen is proud to say. The entry level is now a modern man cave. "It's an entertainment space," the owner states. This inviting space features a pool table, a bar, a home theater and multiple TVs. "It's pretty sweet," the owner admits. 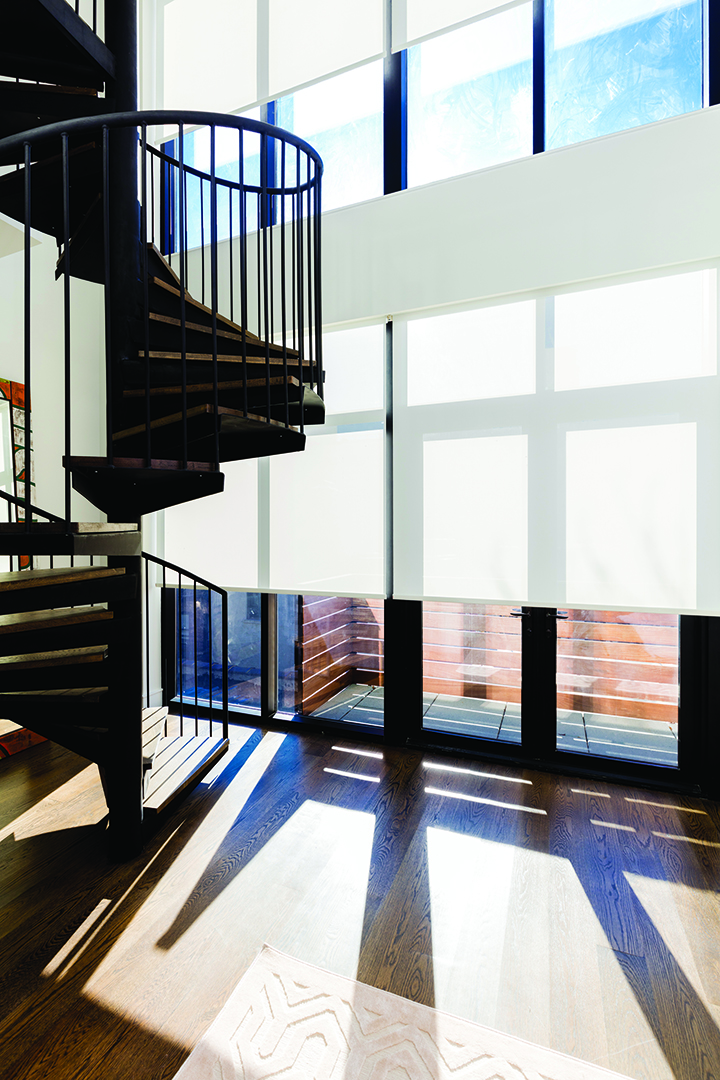 Another major highlight of the house is the new giant windows on the southern side. The entire back of the brownstone is now glass- windows over 20 feet high look out onto the backyard. Of course, the owner didn't want the windows open and exposed at all times; he wanted control over the light, the view, and his privacy. "That was a big component of this job," Stephen the installer notes. The immense windows now feature motorized shades (both blackout and sheer) that are part of the automated system. "It's a really cool experience when you start moving those shades," Stephen continues. "It's definitely a show."

As with any system, it took some time for the owner to learn what features he needed and used, and Stephen helped adjust the system until it was just what the owner wanted. "The ability to dial in, make an adjustment, tell the client to try it now, is really terrific," Stephen remarks. In the mornings, certain lights in the house automatically turn on. The system also now features several conveniences that tackle the challenges of living in a home with so many levels. Upstairs in the master suite, the owner can hit a button on the Touch Screen marked "Midnight Snack," which gently lights a path down to the kitchen. "When your bedroom is on the fifth floor and the kitchen is on the first floor, you're going down four flights of stairs to have a snack," the owner notes. "To be able to light your way is awesome." Another cool feature is so subtle, the family doesn't even realize it's happening: When the sun begins to go down in the evening, lights in some parts of the home slowly-very slowly-begin to brighten. Over 45 minutes, as it gets darker outside, the lights increase inside. "It's so subtle you hardly see it," Stephen notes. Lighting also helps guests at night, showing the way from any of the bedrooms to the common areas in the dark. The system saves the owner from unnecessary trips up and down stairs in other ways, as well. For instance, the house features six temperature zones. If someone leaves the AC on down on the lower level, the owner can turn it off from his phone way up on the rooftop deck. 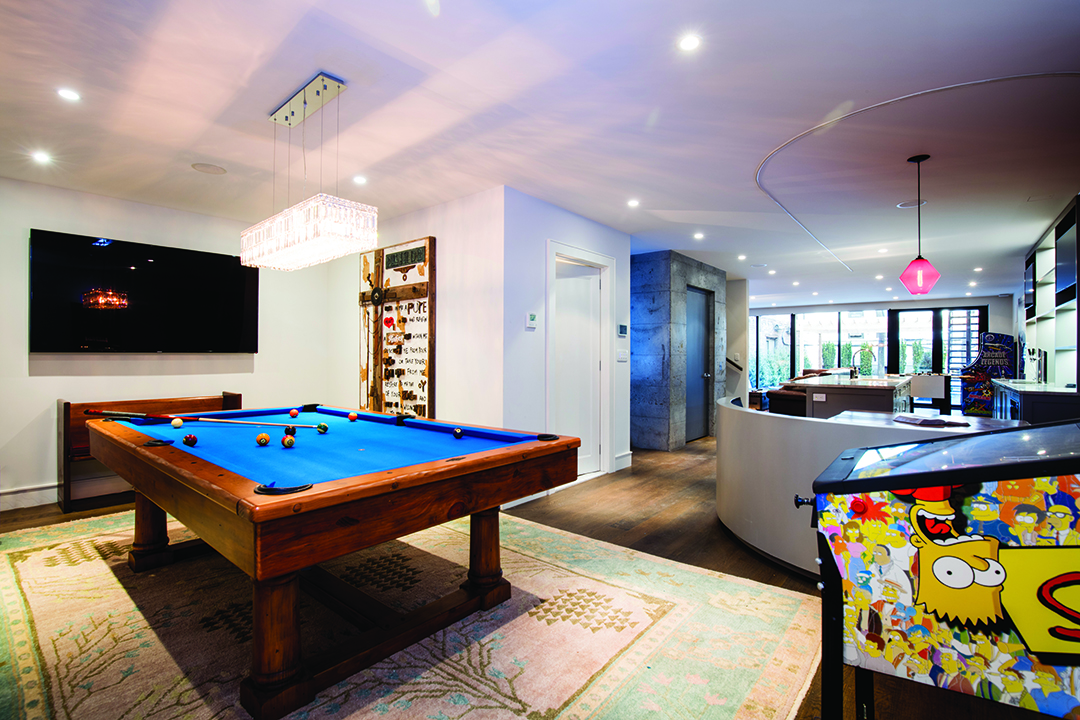 Because this home is located in an urban, metropolitan area, security is key, and home automation delivers. When the owner hits the "Away" button on his way out the front door, the house turns to "unoccupied" mode. The giant shades are lowered, lights are turned off, and if anyone rings the doorbell or enters the home before he returns, the owner will receive instant email notifications. "It's nice to know that, 'Oh, someone just came in,' like the housekeeper," the owner notes. "When we have guests it's nice to know when they're coming and going, too," he continues.

Stephen and his team are very happy with how this classic-modern project turned out, and so is the owner. However, as cool as this property is, the owner knows that once his nest is empty, so to speak, it will be too big of a space for just him and his wife. But, he also knows the cost of adding the system will be worth it, when he's ready to sell. "On the resale, the system will absolutely pay for itself," he says. And, this owner is so pleased with his smart home, he's now having Stephen and his team tackle that pesky outdated automation system at his Connecticut home, Stephen notes. "Which is a ringing endorsement, as far as I'm concerned." 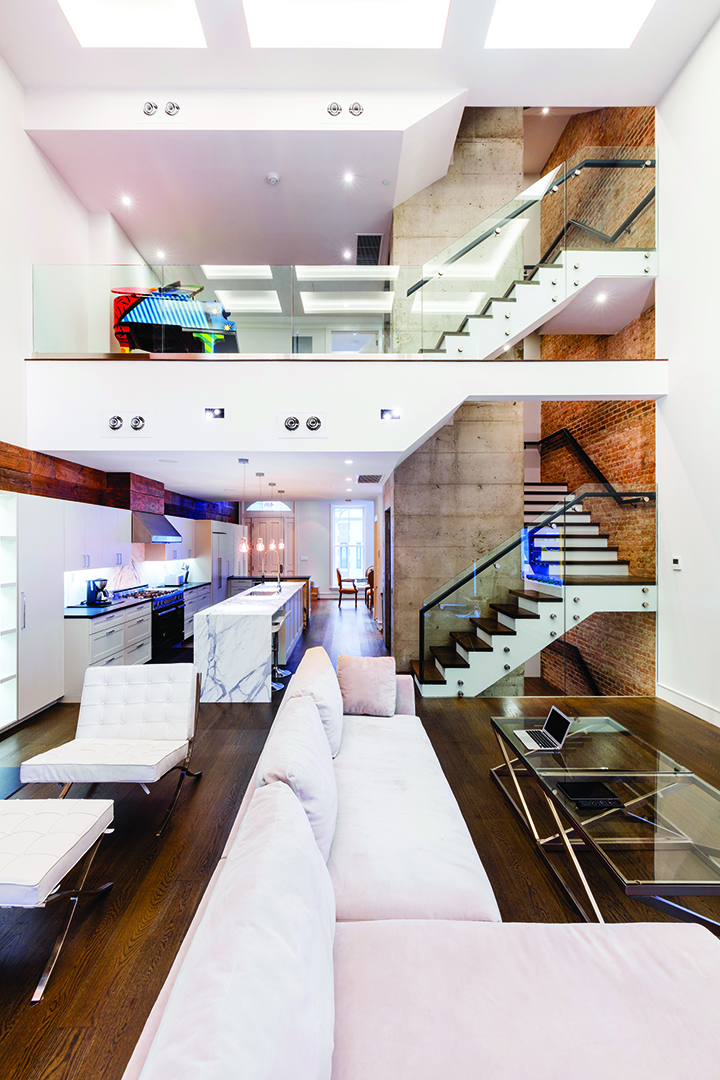