In computing, a "killer app" is a program that is so valuable or popular that it basically guarantees the success of the technology with which it's associated. Technology historians have long said that the personal computer would never have caught on without the appearance of VisiCalc, the first-ever spreadsheet program. Businesses and professionals who had resisted the idea of a personal computer finally purchased one when they saw the value proposition that VisiCalc offered to them and their businesses.

The immersive video game Halo did the same thing for the Xbox. Fanboys bought the Xbox to play Halo, and not the other way around.

For years, the conventional wisdom within the home automation/custom electronics industry has been that home theater is the killer app. As the thinking goes, building a state-of-the-art media room gives homeowners a good taste of automation technology, whetting their appetite for more expansive systems and eventually full-house control.

In many ways, this is borne out by the data. For example, in a recent survey, Control4 asked existing customers what kind of equipment they had in their homes. Over 90 percent of our customers told us that they had home theater equipment as part of their Control4 system. When we asked the complementary question—what type of equipment are they considering adding to their home automation install—around 10 percent told us they wanted to add home theater.

For those of you keeping score at home, that adds up to right around 100 percent. 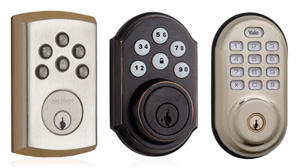 In his blog post, "The thing that will save Custom," John Sciacca suggests that home theater may not actually be the best point of entry into smart home technology. In fact, he suggests that the true "killer app" for home automation might actually turn out to be your home's point of entry: your door locks.

The argument is an interesting one. Market forces are making it more and more difficult for custom installers to sell home theater rooms while still making a profit. Dime-thin margins and new DIY-friendly technology are conspiring to put many custom electronics dealers out of business. On the other hand, door locks are something that everyone has, and the various "use cases" that can be made to justify smart locks can be appreciated by just about anyone:

Unlock on arrival – Ever get to the front door with arms loaded down with groceries or luggage or a sleeping child and wish you didn’t have to fumble with the keys and the deadbolt? Why not unlock it from your car while you’re pulling up. Oh, and turn the lighting on while you’re at it.

The late night door check – “Can you check to make sure all the doors are locked?” I can’t tell you how many times that question has made me be the one that has to get up out bed to walk around the house checking the (stupid) doors. Wouldn’t pressing one “Goodnight” button that did this for you – and set the lights and HVAC and security and powered off the A/V gear and… -- be so much more simple and awesome? And then maybe a status feedback that actually SHOWS that the doors are locked?

Controlled access – Imagine that you have a housekeeper, dog walker or personal wine-rack riddler that comes to your house on Wednesdays. You can provide them each with a code that only works for them and that only works on that day. Or only works with a specific window of time if you like that better. Because if my wine guy doesn’t get to that Moet and Roederer by 2 PM, so help me!

Temporary access – Say that you need some kind of service call visit to your home but you can’t be there. Instead of worrying leaving a key somewhere, or arranging someone to meet them or leaving the house unlocked all day, you can set up a temporary code that you can give out and then easily delete.

Emergency access – Ever worry that you lost your house key and that they only way to let yourself in would be with a brick? Or ever been on vacation, say this past May at Disney World, and then had someone, say your wife, whose name may or may not be Dana, mention that they were suddenly worried they had forgotten something important, like say, turning the oven off of Broil mode? Instead of calling your neighbor and saying, “If you see black smoke pouring out our house, please call the Fire Department, would ya?” you could say, “I’m going to unlock my front door; would you mind checking the oven and then calling me back?”

Notification upon entry/exit – Want to know what time your kids really came home? Or exactly how long the “three hour housecleaning” really took? You can get e-mail or text message alerts anytime a code is used; knowing who came in or out of the house and at what time. Makes it tough to sneak into the home when your door code expires at precisely 12:01…

Interestingly, a few of these points are very similar to those I made recently in my own blog post, "Top Ten Home Automation Features You Didn’t Know You Needed."

What do you think?
Previous
Next