The classic “He-Man Hideaway” gets updated with automation.

LOCATION: Lexington, Massachusetts & Toronto, Canada // DEALER: Sounds Goods Corporation & Cinema Systems Corporation // PHOTOGRAPHY: Jim Stone
Since the dawn of time—or perhaps just since man lived in caves, actually—the alpha male of the family has desired a place of his own. A room where he can get away from it all, have a sip of a little fermented-something, and entertain some fellow cave dudes. Thus, the man cave was born. Ever since, the concept has grown and evolved, and now, with the help of automation, man caves have experienced a complete overhaul.

The Man Cave 2.0 boasts all the elements of your classic man-space, but now includes tantalizing technology that is so cool, the caveman might even invite his woman and children in from time to time. The best part is, with all the choices in smart home automation, every man (or woman) can craft their cave in their own style and scope. In short, even though they’re often subterranean, the sky’s the limit! Here we highlight two very different, but equally awesome, examples of the modern man cave in action.

TOYS IN THE ATTIC
Just outside of Boston, on a quiet residential lane in Lexington, Massachusetts, one family has turned their top floor into an entertainment epicenter. After the kids discovered automation at a neighbor’s house, the father was convinced to add it to their own place, with just one guiding rule: It had to be just a little bit cooler than the “Jones's” system.

The homeowner brought in Gregory Brett of Sounds Good Corporation to add smarts to the third floor, and Gregory knew from the get-go that Control4 was the right solution. “In the Boston area, a lot of projects are retrofit projects, like this one. Control4 works great with retrofits. It’s the largest control system that we use today,” Gregory says. He started by adding a simple lighting system to the theater space, but the owner enjoyed that so much, they quickly expanded automation across the entire third floor.

By the time they were finished, Gregory and his team had built a stunning space with all kinds of fabulous features: the theater room, a billiards room, a wet bar, and fully integrated lighting, audio, video, intercom, and cameras. It’s the sort of space you could easily hole up in for hours on end. One essential element of the man cave is security (after all, a man cave shares many characteristics with its closely related cousin, the kid fort). 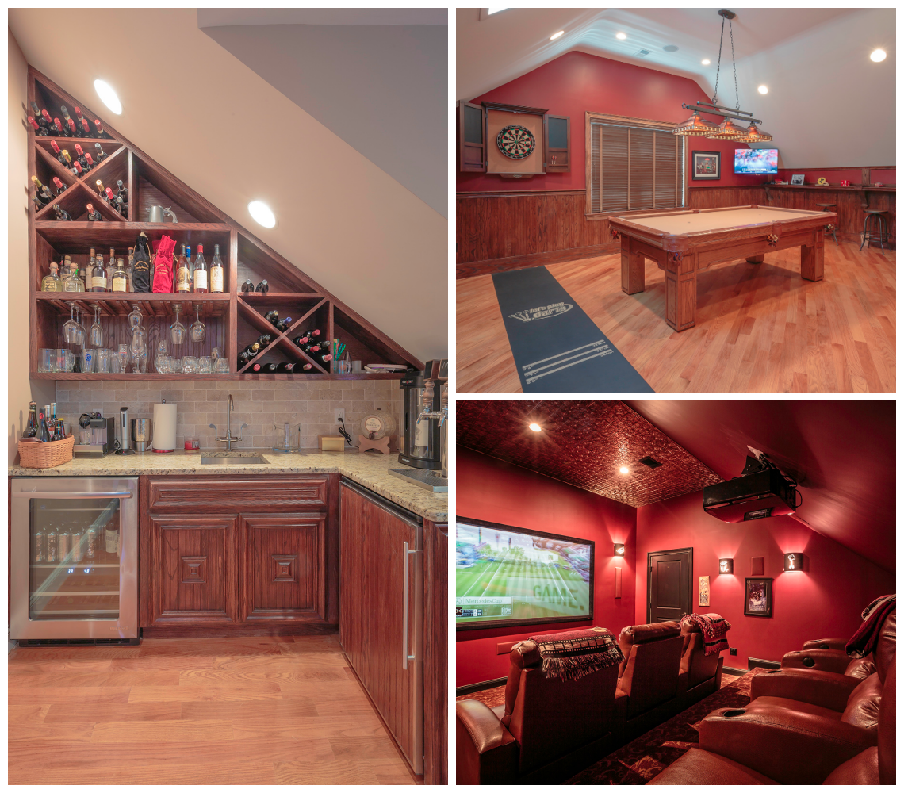 LEFT: After tapping the “All Off" button, guests have 15 seconds to finish their drinks and exit before the lights dim. TOP RIGHT: Originally installed to control just the lighting, this system now controls audio, video, security cameras, intercom, and more. BOTTOM RIGHT: Movies and video games in this Massachusetts cinema room are paused when the doorbell two floors down is pressed.
In this top-floor version, the automation system keeps the homeowner keenly aware of anyone trying to access the inner sanctum. If someone rings the front bell, the doorbell will interrupt whatever movie or music is playing upstairs. The owner can see and talk with visitors and decide to let them in or not. If the visitors pass the test, the owner grants them access by unlocking the door from a touch screen or mobile device—all without leaving the top level.

Other convenient features of this fun-zone include lighting scenes to set the mood for any specific activity—movie watching, drinks at the bar, or a game of pool. And, as an added convenience, the “All Off” button includes a 15-second delay, so people can head down the stairs before the lights begin to dim. Nice touch! Another smart home favorite is the intercom. If the kids have taken over the man cave, the parents can tap a touch screen in the kitchen and see what the little ragamuffins are up to, as well as remotely control what the kids are watching or what game they’re playing. As an added bonus, the parents no longer have to yell up two flights of stairs just to tell the kids that dinner is ready. “It just makes the smart home more accessible,” Gregory notes.

Is this modern man cave a success? The owner’s future plans prove it: He’s adding automation to the basement, which will sport a workout room, a sauna, and a wine cellar. They’ve also added audio and video automation to their outdoor deck. The owners love their updated space, and Gregory couldn’t be happier. “It’s a great example of how you can start with just one small project and you can just keep growing with it over the years.”

CANADIAN CLASSIC
Meanwhile, in Toronto’s Beach district, a lawyer has built the rec room of his dreams. It’s a very classy affair, featuring a leather couch, vintage (working!) telephones and typewriters, and a distinctively Canadian scotch bar. But, while this swanky space sports all the essentials of a man cave, the owner Jason insists it has a different name. “We call it the library,” he says with a smile. “My wife was absolutely adamant we weren’t going to call it a man cave.”

In this Ontario "library," automation operates invisibly, allowing the fine woodwork to remain smooth and sleek. When the library becomes the "whiskey and cigars" room, silent fans kick on to keep the air circulated.

Located on the lower level of his Ontario home, the room began as a basic TV room. Jason and his wife were interested in finding a way to cover the television with a piece of artwork when the TV wasn’t in use. “We didn’t want to have this black hole staring out at you from above the fireplace,” Jason notes. So, they found Morgan Millward, president of Cinema Systems Corp., and soon discovered a larger world of automation possibilities. And, while they eventually embraced all sorts of automated aspects, they were insistent on preserving the clean and elegant look of the room. “They wanted AV in the room," Morgan notes, "but didn’t want to highlight it—they wanted it to disappear as much as possible.” Morgan went with a Control4 smart home system, as he often does. “Control4 is the right solution for every project we do. It has a lot of features, it’s reliable and at the right price point, and that’s a winning combination.”

By getting in on the room renovation early, Morgan and his team saved themselves a heap of headaches. They were able to pre-wire the room without disturbing the luxurious woodwork. “Having everyone together at the early stages was really important,” Morgan recalls. Morgan was even able to hide equipment racks behind the crafted millwork of two different cabinets on either side of the fireplace.

Today, this man cave—ahem, Library— is automated to the hilt. “We’ve integrated a lot of technology into a small space, and made it disappear as much as possible within that space,” Morgan notes. If the room is off, the moment the door opens, lights come up to greet the guest. When someone’s ready to watch TV, the system reveals its hiding place. The painting of Pebble Beach golf course disappears into a slot as the lights dim for proper screen viewing. Another elegant touch is the absence of wall switches; smooth and stately woodwork remains unblemished while the owners turn lights on and off via their Control4 remote, smartphone or iPad. Meanwhile, motion sensors also monitor movement. If the AV system is off and 20 minutes go by with no motion, the system shuts down.

This ordinary lower-level room is now the ultimate entertainment den, where Jason and his wife can cuddle up and watch a movie by the fireplace on a wintry Toronto evening, or, where Jason can gather with his buddies to sip scotch and smoke cigars. A hidden extractor fan quietly keeps the room nice and clean. “My wife’s happy about that,” Jason laughs. And now, instead of lugging a boom box into every room, Jason and his wife can access their music from their iPad tablet.

But the frills don’t stop there. Another awesome automated element is the motorized window blind, which drops at the touch of a button to dim the room for television time. The blinds also work to protect the woodwork from getting sun-bleached at certain times of the day. Guests are understandably amazed when they visit. “People love it when you push the button and the TV comes up; it’s really neat,” Jason notes. Jason will open the Control4 app on his iPad and leave it out, so guests can change the lighting or the music. “Everyone loves the room,” Jason says with a smile. “We’re so proud of it.”

Want to learn more about Control4 automation for your own home? Fill out the form below!