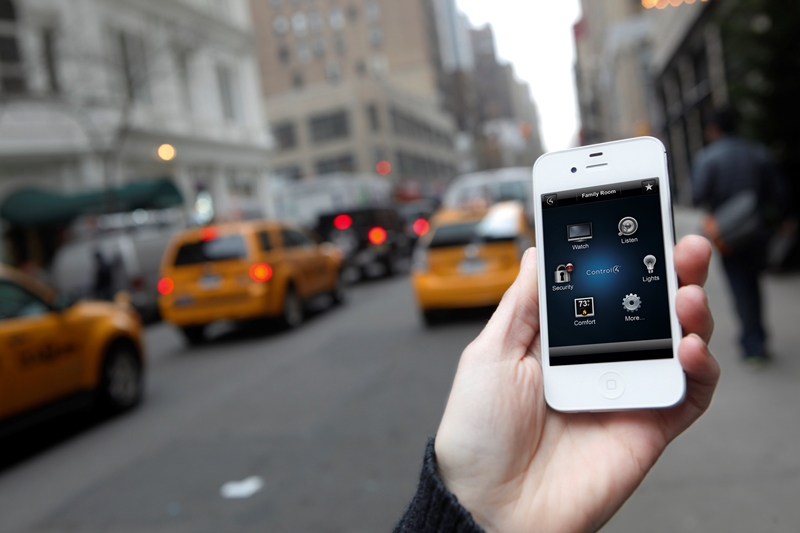 Apps: Are They Making Your House Too Complicated to Control?

This post comes to us from Lisa Montgomery, Senior Editor at Electronic House and freelance home technology writer.

According to Gartner, Inc.*, by the year 2022, the average family home could contain more than 500 smart devices*, and it’s likely that each of these products will be able to be controlled via an app on a smartphone or tablet. On the surface, this might sound like a good idea, but imagine hunting and pecking through dozens of individual apps to manage your home environment. Instead of making your house easier to control, your app-infested phone could conceivably make the process painfully tedious and time consuming.
To get your house ready for your return home from work, for example, you might launch one app to adjust the settings of a smart thermostat, back out of that app and launch a different one to turn on the lights, then yet another to deactivate the electronic door lock, and so on. Also, because each app is designed by a different manufacturer, you’ll be dealing with inconsistencies in the layout and look of the individual control menus and icons. It’s a learning curve you may not want to deal with.
And as data from Neilsen** research points out, most people don’t want to interact with more than 30 apps per month in total. When you add multiple individual home control apps to the everyday must-haves like Google, weather, Pandora, maps, Facebook and more, your smartphone could quickly reach app overload.
At this point, it becomes more convenient, efficient and effective to unify all of the various apps under the auspices of a central home control system. With a system from Control4, for example, you’ll be able to monitor, manage and control more than 8,000 devices via a single control app, where one command could signal the lights, thermostats and the audio system to adjust for your arrival home from work.
Moreover, a Control4 system makes these devices interoperable so that they can be automated to self-regulate according to conditions like the time of day, occupancy in the home and even the position of the sun.
Another benefit of integrating your home’s electronic components within a single home control app is having a consistent user interface. In other words, the controls you see on your phone or tablet to monitor and operate the lights will look and function similar to that of the controls used to set the thermostats and security system, for example.
Bottom line, a unified home control app looks better and functions more efficiently than a slew of individual apps ever will. So before you load another app to control another smart device onto your smartphone, consider the merits of tying them all together under the command of a single control system.