Several months ago, a colleague of mine wrote a blog post about the benefits of housing all of your AV and networking gear in a rack. Recently, I had started to have some issues with the AV equipment in my home overheating, but I still hadn’t really ever considered purchasing a rack. That is, until I read his blog post. I realized that putting a rack in my home would likely be the solution to my equipment overheating.

Several months ago, my satellite receiver would randomly shut off as I was watching TV and a message would pop up alerting me that the internal temperature was too high and it needed to power down. It didn’t take me long to realize that because my TV cabinet was stuffed full of all of my AV gear and several pieces of equipment were stacked on top of my satellite box, it was being completely suffocated in the cabinet. Initially, I purchased a fan off of Amazon and installed it in the TV cabinet. For a while, it did seem to help. But in the heat of the summer, the issue would present itself yet again.

Next, I decided to install a Control4 HDMI Matrix switch and move all of this gear to my storage closet below my stairs, where I already had an old iMac running as a server for my home. This ended up being a pretty slick solution and I love my Control4 HDMI Matrix switch, because now I can distribute all of my sources to any TV in my house. But I still ended up with all of my components stacked on top of each other, giving me the same suffocation and overheating issues I had been experiencing with all of my devices in the TV cabinet.

Aside from this obvious issue, another annoyance was the massive amount of unorganized wires that created a rat’s nest in the cabinet I was using. I was using six different power strips, daisy chained off of each other, to power all of my gear. It was a disaster (and probably a fire hazard). Seriously—check out the before picture below.

Besides the potential safety issues, this created problems anytime that I needed to swap out a piece of equipment or make a change to some of the networking components in my home. On multiple occasions I tried to organize these wires but there was nowhere to tie them down and they always ended up in this same situation—with cords and wiring going haywire.

After a little bit of convincing with my wife (she didn’t love the idea of spending money on something that sits in the closet and we never see), we finally ended up purchasing a Forge Rack from TruAudio. I was so excited to get all of the equipment installed in it, so I spent some detailed time laying it out and putting all of the devices in the right places. Racks are designed so that none of the AV or networking components are actually touching each other. Even though it might not look like it from the front, not one device is stacked directly on top of another, allowing air to circulate around the devices so they can “breathe” and don’t overheat. I also purchased a rack-mountable fan that I plugged into a Control4 Outlet Dimmer Switch and programmed it to only turn the fan on when I’m watching TV, adding just an additional level of protection. We haven’t had a single issue with any device overheating since installing the rack.

I was also able to rectify the eye sore by neatly organizing the rat’s nest of wires, making it so much easier to swap out a device when necessary and, even better, it is no longer a fire hazard. It also adds an additional "cool" factor to my home. When I told my friends that I installed a rack, none of them really knew what I was talking about, but when I opened the closet to show them, they marveled over it and now want one in their respective homes.

I am extremely pleased with my rack purchase. I’ve learned that even though it might just be a metal frame that sits hidden in a closet, it really is one of the most important pieces of equipment you can own to properly store all of your home automation and AV gear. 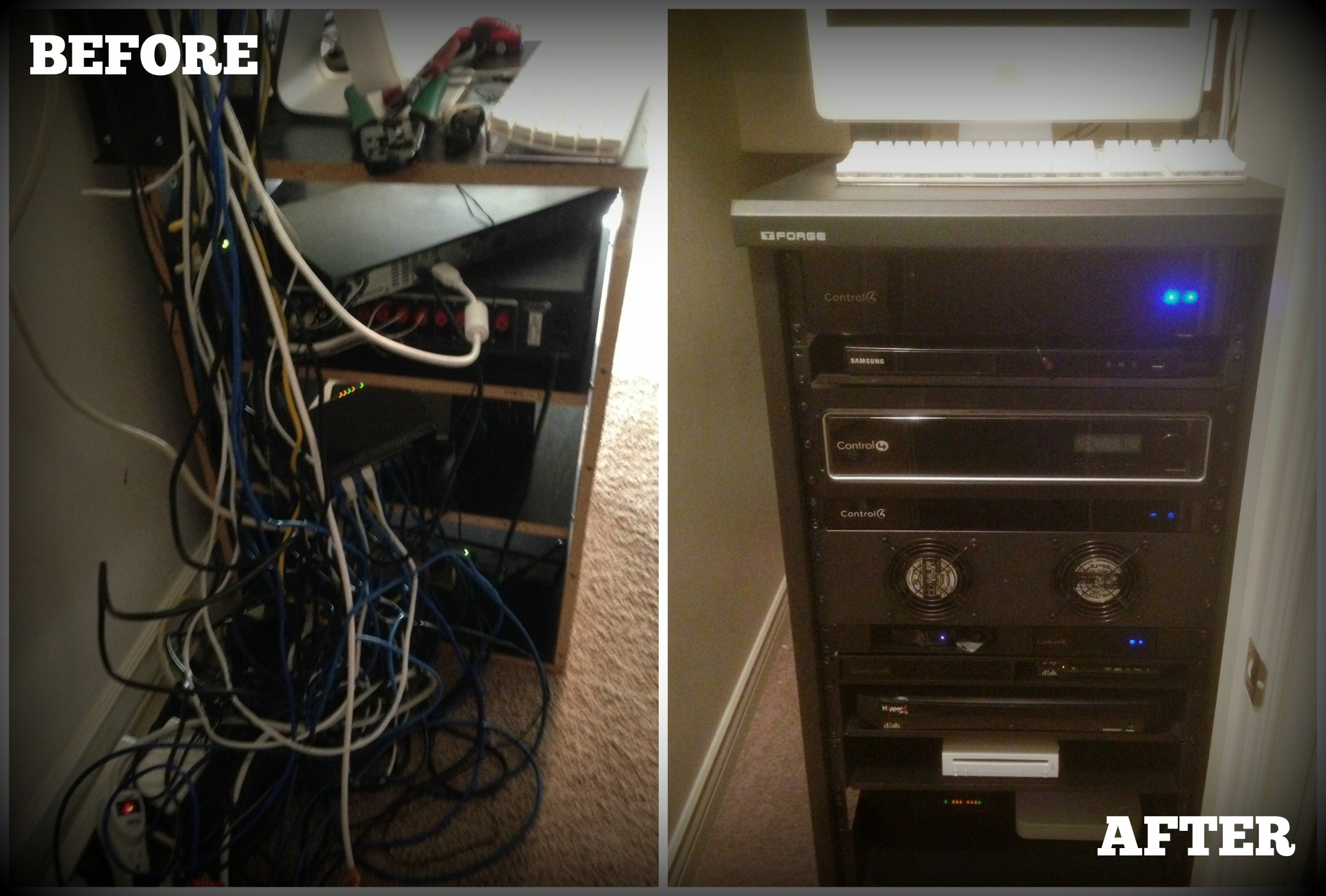