And The Award Goes To…

Some people are Oscars folks. Others prefer events like the upcoming Super Bowl. As for me, the GRAMMY Awards are what I look forward to each year. So I am eagerly (and pretty impatiently) waiting for this Sunday to arrive.

I wouldn’t say I’m necessarily an audiophile. Although whole house audio was the first thing we added when we had our Control4 system installed. And whenever we have friends over, it’s all about passing around the Control4 Portable Touch Screen, as we each take turns controlling the speakers to blast our newest flavor-of-the-week.

But there is just something about the GRAMMYs that has always gotten me uber-excited. Maybe it’s the wicked cool—and outlandish—outfits you see on stage (as I’ve never been one to get riled up over Academy Awards ball gowns). But Nicki Minaj’s strange red cape and a her hired escort dressed as the pope? Or Cee Lo Green channeling his inner multi-colored chicken? Now, those outfits were something to see.

A few select friends and I spend each year doing “GRAMMYs in Jammies.” Essentially, it gives us a shameless excuse to lounge around, drink wine, and root for our favorite artists to take home an award. Two of my choice artists—Lorde and Bruno Mars—are nominated for Record of the Year. I’ll be happy if either one takes it. And I won’t be too distraught if Kanye comes up empty-handed for Best Rap Album. He could use a slice of humble pie.

This year I’m going to shake things up a bit. I have planned to start the festivities a little earlier and have a Rhapsody playlist ready to go with some of my favorite nominated tunes. I’ve also found a great TuneIn Radio station called “GRAMMY Radio” that we’ll pipe through the family room speakers until the show starts. I’ve even found an awesome link from CBS with some fun GRAMMY snacks—Bruno Mars bars, Eminem cookies, Cee Lo Green Beans? Awesome!

Every year I find a new artist that I can obsess over that I wasn’t familiar with the year before. This year, as we all crash-land in the theater room to watch the big show, I’ll be writing down all my new picks to start compiling them into playlists for when it’s warm enough to enjoy the tunes in the backyard.

Cee Lo Green, as a multi-colored bird of some sort. 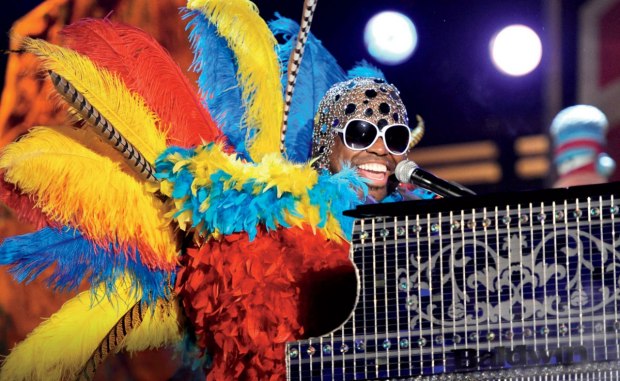