Is Control4 Smarter Than My 3-Year-Old? 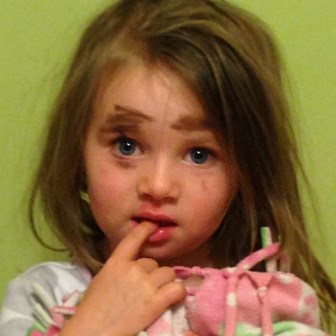 Nope, these aren't her real eyebrows.
My daughter is a bit of a midnight mischief maker. We tuck the little angel into bed every night around 8:30, kiss her sweet little head, make sure the nightlight is on and the Dora Pillow Pet snuggled by her side. Then my husband and I close the door and head downstairs to tidy up the house and watch some TV or go sit on the patio to enjoy a little catch-up chat after our busy day.

As soon as she’s done having a dance party, book-a-thon, fashion show in her room -  and yes, I mean every single book is on her bed and every piece of clothing from her dresser has been tried on and then stuffed in the now-empty bookshelf – she seems to get a little bored. So she started sneaking out of her room a few weeks ago. And that’s when the real fun begins.

Over the course of the last few weeks, she has completely ruined about a dozen MAC lipsticks (ladies, you know how expensive that is!) by drawing with them on my bathroom cabinets, her carpet and her face. Toilets have been stuffed full of toilet paper. Every single piece of my jewelry disappeared, only to be found later shoved in her piggy bank. Entire bottles of shampoo and conditioner were emptied on to the shower floor. Every single beach towel removed from the hall closet and deposited in her bedroom. Boxes of Bandaids were opened and stuck to every surface of her body along with a few dolls. Somehow she uses evil 3-year-old magic to stealthily move about the upstairs, even when we check on her every half-hour or so. We’ve caught her in the act a few times. A few others, we’ll find her curled up in her bed with her hoard piled around her looking as innocent as a baby but for the evidence of her wanderings.

This was annoying, to be sure, but we figured our house was pretty baby-proofed so we just kept trying to contain her the old-fashioned way…by keeping an eye and ear out for her. It wasn’t until one night when I parked myself within an earshot hoping to catch her in the act that I found out exactly how dangerous this nighttime naughtiness could be. I went up to check on her about 20 minutes after putting her to bed. Bear in mind, I’ve been sitting “right there”, working on my computer with the TV volume turned low specifically in order to hear her sneaking about. I opened the door to her bedroom and was hit with a waft of strong smelling something.

What are you doing? I asked, alarmed. Painting my ponytails, (her word for “toenails”) she says innocently. She was painting them with Liquid Bandaid. In her bed. I can only assume that because I had preventatively removed my bin of fingernail polish from the bathroom to a secret location reasoning that after the lipstick, that might be her next art project. She had climbed the shelves of the hall closet and found the next best thing—Liquid Bandaid. How dangerous could that have been? And the fact that she had discovered our secret hiding place for medicines and such…even worse. I didn’t want to think about what could have happened, but I did. Not to mention, what if her midnight wanderings took her out the front door while we were sleeping? She’s just finished potty training a few months ago so locking her door seemed like it would lead to a whole different set of problems, but we needed to keep her in her room. Or at least know when she was out of it.

Thank goodness it’s so easy to personalize a Control4 system. We quickly added a motion sensor in her room and had it set so that between 8:30pm and 6:30am, any time movement is detected in her room my husband and I both get a text message and the lights in the TV room, the upstairs hallway, and our bedroom flash. We could have also put a pressure sensor under her mattress or put a contact on her door so when it was opened the same events were triggered but we kind of wanted to know when she was up and at it in her room. Believe it or not, it took less than a week to break her of her midnight mischief.  And we both sleep better at night knowing that if she has to get up for anything, we’ll be the first to know.
Previous
Next