Now That’s Hot: The Wonders of a Smart Thermostat

We recently moved into a new house. Actually it’s an older house, built in 1998, but it was new to us. Having come from a fully automated Control4 smarthome where the thermostat was placed discreetly in the basement and the sensor was hidden behind the textured paint, you can certainly imagine my shock when I saw the thermostat in our “new” home.

This was not even a “dumb” but somewhat modern, somewhat programmable thermostat like you could get at any Home Depot. No, no. This sucker was seriously old fashioned. 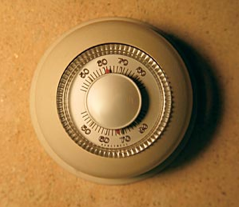 Having just spent a grundle of money on the house, the move and furnishings of a few empty rooms, we decided to hold off on automating the new digs for a few months. A few summer months. Bear in mind, our house is three stories and has one air conditioning unit. One. A sad little, overworked AC unit struggling to cool the entire home in June, July and August. That seems like a grave planning error to me but, again, we decided to be prudent and hold off on adding any additional units. You know the old saying, if it ain’t broke…

We finally got our basic Control4 system installed in August. Just an HC-800 controller, a thermostat and a half-dozen light switches and keypads on the main floor, and a portable touch screen. We have plans to add smart locks, more lighting and maybe some audio down the road but this took care of our primary pain points. The new Control4 thermostat is incredible compared to the old beast. The fact that we were able to set a full week of programming right from our touch screen (something that 70% of people do incorrectly*, presumably because it’s too complicated) meant that we could set the house to cool just before our scheduled arrival time—which varies from night to night depending on my husband’s work schedule, the kids’ soccer or gymnastics lessons, and my yoga class. In the morning, the AC kicks on so the house is perfectly warm for getting ready, about an hour after we leave the AC shuts off, and just after bedtime we kick the temperature down a few notches because we sleep better when it’s cold. On the weekends, we would inevitably rush out the door forgetting to turn the AC temperature up while we were out and about, I can now just hop on my iPhone from my soccer-mom chair and turn the temperature down to an energy saving, yet comfortable, temperature.

Having that kind of control in the palm of my hand isn’t just convenient, it’s saving us a ton of money. The electric bills for the first couple of months were literally jaw-dropping. Since we’ve had our Control4 home automation system programmed, the utility bill has nearly been chopped in half. That’s a pretty impressive savings from such a simple thing. If we keep it up, we might be able to afford that second HVAC system by Christmas.