One of the most frequent questions I get from people about Control4 products centers on the selection of the ZigBee home automation standard for its wireless lighting products. Obviously, there are plenty of communication protocols to choose from, each with their own advantages and use cases:
Wi-Fi (IEEE 802.11): Wi-Fi has been the de facto standard for home and public wireless local area networks (WLANs) for over a decade. Intended for both residential and commercial networks, Wi-Fi networks may be either open or secured (using such protocols as WEP, WPA and WPA2), and supports various bandwidths depending on which “flavor” of the 802.11 standard is being used. Wi-Fi uses the same IP-based networking protocols used with standard wired computer networks, and is commonly integrated into computers (both desktop and portable), mobile devices such as smartphones and tablets, digital cameras and video game consoles. The standard is maintained by the Wi-Fi Alliance.

Bluetooth (IEEE 802.15.1): A standard for short-range networking created in 1994, Bluetooth uses frequency-hopping spread spectrum radio technology to transmit data in packets across 79 one-MHz channels. The standard is often used for peripherals (such as keyboards and headphones) to connect them when they’re in close proximity to their master device. More recently, Bluetooth has become the standard method of pairing up mobile devices like smartphones and media players to automotive audio systems. Bluetooth is limited to low-power devices and distances of 30 feet or less. The standard is managed by the Bluetooth Special Interest Group.

Z-Wave: One of the few wireless technologies created specifically for home automation, Z-Wave was designed for low-bandwidth data transmissions, and is particularly suited to control devices in residential and light commercial settings. The wireless transmitters operate at around 900 MHz, which helps it avoid interference from devices on the 2.4 GHz band. Like ZigBee, Z-Wave uses “mesh networking” to send messages. Z-Wave was originally developed by Sigma Designs and is now controlled by Zensys, which obtained the rights when it acquired Sigma Designs in 2008. There is also a Z-Wave Alliance, a group of manufacturers that build products based on Z-Wave technology.

ZigBee (IEEE 802.15.4): The ZigBee home automation standard is an open wireless protocol for personal-area networking (PAN) which was developed in the early 2000’s as a low-cost, low-power alternative to currently available networking protocols. Like Z-Wave, ZigBee is a “mesh networking” technology, in which packet signals are relayed by adjacent devices within the mesh until they reach their intended target. ZigBee is designed to be very tolerant to radio interference, making it a very good standard for technology-rich smart homes. The standard is maintained by the Zigbee Alliance, a consortium of organizations and companies with an active interest in the technology
As you can see, ZigBee is just one of several ways to get signals wirelessly from device to device within a smart home. Some Control4 products use Wi-Fi or wired Ethernet connections (802.3); others leverage the power of Bluetooth, AirPlay and DLNA. Our systems also inter-operate with partner products to enable Z-Wave compatibility. But for our lighting systems, ZigBee home automation was a very appropriate choice.

The Power of the Mesh. When most people think of home automation networking, they think in terms of Wi-Fi, which uses a “star topology.” This means there’s a device somewhere (usually a wireless router) that connects directly to every other device accessing the network. Mesh networking, which is used in both Z-Wave and ZigBee home automation, is different. A given device doesn’t necessarily need to “see” the master device. Rather, it just needs to be able to connect to any other device on the network. When a signal is sent in either direction (either from the controller or from the individual devices), it is echoed by the adjacent devices, which rebroadcast the message to other devices (and so on) until the message gets to its intended destination. Mesh networking allows for much lower-powered devices while still covering large areas. Because of this, it’s the perfect choice for smart lighting in home automation applications.

Low Power, Low Bandwidth. The signals sent by home control devices are relatively simple. We’re not talking high-bandwidth video and music streams. Rather, we’re generally talking about simple on/off and state-change signals. For this type of networking, Wi-Fi and even Bluetooth would be overkill. Both ZigBee and Z-Wave devices take advantage of the low power and bandwidth requirements of their respective protocols. This makes for much more efficient devices, and reduces the amount of “background noise” in a residential or light commercial structure that is already awash with signals on virtually every part of the radio spectrum.

So there you have it. ZigBee is a wireless networking standard that requires very little power to enable and can cover large areas thanks to its mesh topology. ZigBee home automation products leverage a communication technology that was developed specifically for this type of smart home application, making it (in essence) a very appropriate tool for the job. 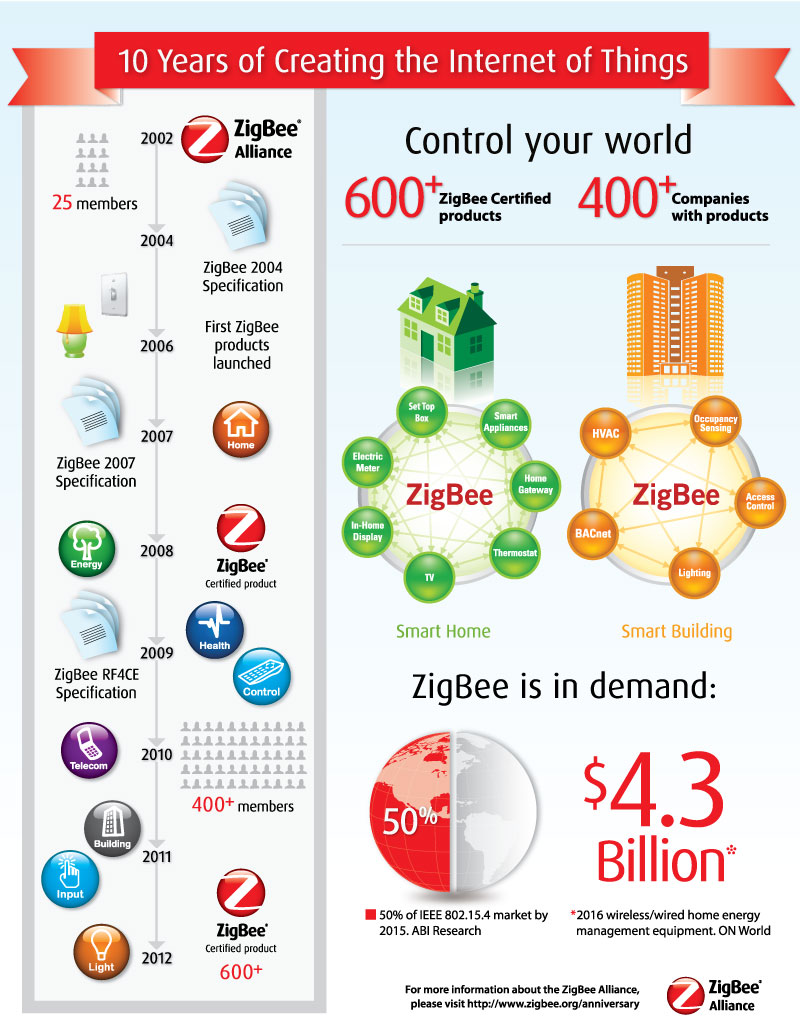