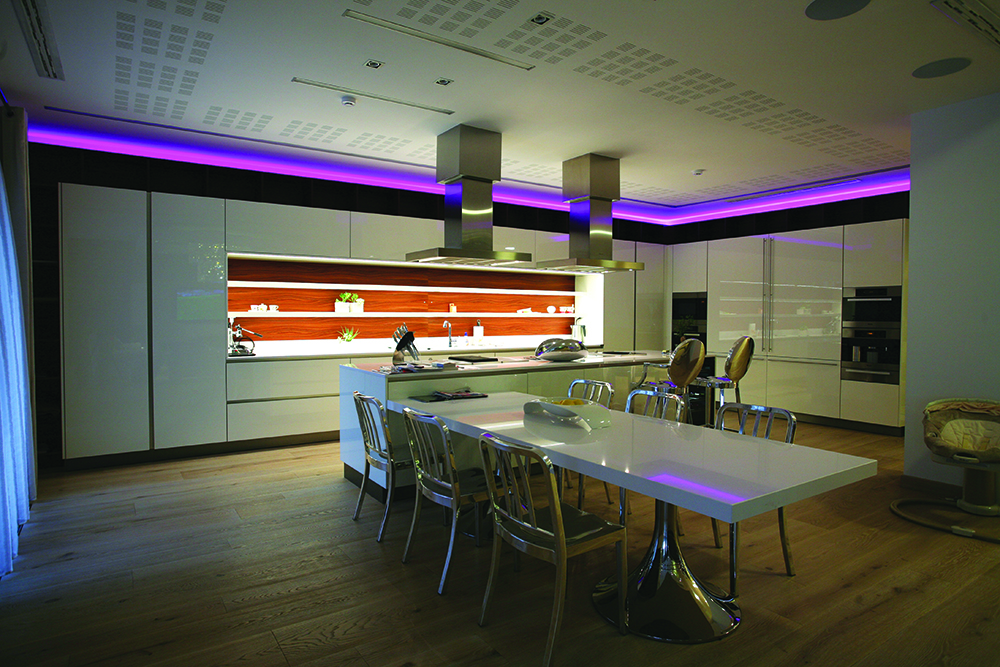 The Benefits of Control4 Lighting and New Advanced Lighting Features

My wife and I have lived with the benefits of distributed audio and video in our home for years and now we can’t imagine living without it.  It’s just one of those things that becomes a part of your family routine and adds to the enjoyment of being at home.  It’s so great to have music to get you pumped up while getting ready in the morning. Coming home after work to your kids dancing to music playing in the kitchen is always a treat.

However, we’ve only recently begun living with lighting control as part of our daily routine.  After using Control4 lighting control for several months now, we’ve come to love it just as much—if not more—than distributed audio and video.  As parents of both a three- and four-year old, our favorite feature is being able to gather up the kids at bedtime without having to turn off all the individual light switches downstairs.  After we’ve put them to bed, we can simply turn off all the lights in the basement with one button press.  Another big one is the “Away” scene which allows my wife to press a single button on a wireless keypad as she’s headed out the door. All of the lights in the home gradually turn off, while leaving on the garage light for 5 minutes so she has plenty of time to load the kids into the car and leave before the garage light turns off too.

My personal favorite is a “Morning” scene that creates a dimmed lighting path from the bedroom upstairs to the bathroom in the basement.  This scene makes the process of waking up so much easier without having to fumble for multiple light switches on my way to the bathroom or getting blinded by bright lights along the way.  Of course, the Control4 MyHome app with Anywhere Access is awesome for checking in on the house while we’re away to make sure no lights were left on, or to start up a vacation lighting mode when we’re on extended trips away from the home.

Recently Advanced Lighting Scenes were added to the Control4 lighting control arsenal.  So, I had to check this out to see what new features were available.  Here’s a quick summary of the new capabilities and why I think they are super cool:

Scene Tracking:  This feature allows me to see from a keypad if a scene such as “Morning” is active or not.  So, if my wife gets up before me and activates the scene, I can see instantly that she has already turned the scene on, and I won’t accidently turn it off on her.  The way I can tell the scene is active is by looking at the LED right above the “morning” button.  If the LED is on, I know the scene is on.  I can even make the LED a different color than the other LEDs on the keypad to make it very obvious that the scene is on.  This is very useful considering how I am in the morning before I drink my coffee.

Scene Toggling:  Instead of having a separate “Morning On” and “Morning Off”  button taking up space on my keypad, I can simply check the status of the scene to see if it is on or off and then press the “Morning” button a second time to turn all the lights in that scene off.  The LED above that button then turns off, telling me that the scene has been deactivated.  I can use this for turning the “Morning” scene off from my basement bathroom too.  I have a “Morning” button on a keypad in the bathroom as well that allows me to turn that scene off when I’m finished getting ready.

Scene Ramping and Fading*:  This feature allows me to easily adjust all lights in a scene by ramping them up or down at the keypad.  This is ideal for my “Entertaining” scene.  When I first launch it in the early evening the lighting is perfect.  But as the night progresses and it’s darker outside, it’s nice to be able to ramp up the whole scene a bit to make the lighting a little brighter and just right.  I can also see this being useful for my “Morning” scene.  I may feel like I need the lighting to be a bit brighter or subdued and having the option to tweak a little is a nice feature.

I found these to be the some of the best features of Advanced Lighting Scenes for my system, but there are additional features such as a flash option and delays within scenes that others may find to be useful.  If you’d like to have some or all of these features activated in your current or future Control4 lighting control system, make sure to contact your Control4 dealer and see what lighting magic they can create for you.  I can tell you from personal experience it has been a fantastic addition to our lighting control system.