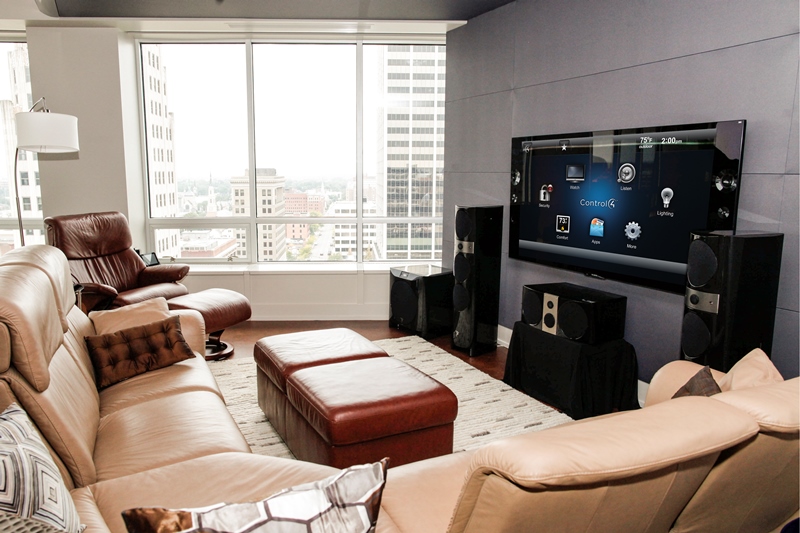 This editorial is written by Dennis Burger, Editor in Chief of HDLiving.com and contributing writer at Residential Systems.

Feast your eyes on this gorgeous new condo in Fort Wayne, Indiana; it’s hard to imagine anyone ever wanting to leave it. In addition to its pristine-yet-inviting modern design and breathtaking skyline view, it’s an absolute technological wonderland, packed with the latest in luxury AV solutions, like a 65-inch XBR-65X900A 4K Ultra HD display and FMP-X1 Media Player from Sony, a 7.1-channel Focal Electra 1000 Be surround sound system, and a Dish Network Hopper with Sling Whole Home DVR. Nearly a hundred feet of automated shades – both translucent and blackout – grace its exterior wall of windows. Even the bathroom is positively high-tech, with an advanced Kohler shower system featuring six adjustable water jets and an external control box that dials in the perfect temperature before you ever set foot in the shower.

Of course, these luxurious electronic elements aren’t surprising when you consider that the condo is owned by John Hopkins, chief operating officer for Sweetwater and an avowed technology enthusiast. His wife, on the other hand – a musician who doesn’t quite share her husband’s passion for technology – was “concerned that she was going to have to buy a miner’s cap to be able to get around when I wasn’t there,” Hopkins says with a laugh.

“So it was really important to me that we have some unified way of controlling everything in the house, and a Control4 system – with its full house integration, from locks to lights to entertainment to security – has really proven to be a seamless control solution for us,” he adds. “The same interface we’re using for the AV components also controls the lights and shades, and even the floor heating throughout the house.”

In fact, for much of the family’s day-to-day interaction with their smart home, that interface comes in the form of keypads which some guests might mistake for fancy light switches. Hopkins and his home automation specialist, Ryan Piper of Millennium Sounds, decided in the planning stages of the condo that, because it wasn’t a retrofit installation, they would opt for Control4’s new Panelized Lighting solution instead of the more common wireless dimmers, switches, and keypads. This would allow for an incredible amount of flexibility in the design of the system. “One of the things I love best about this home is that it doesn’t have a single standard lighting dimmer or switch anywhere. Every switch in the house is a six-button Control4® Configurable Keypad, with the ability not only to control the lights, but also adjust the shades, control the music system, and so forth.”

Custom backlit engraving on each keypad in the home clearly labels the function of every button, and the programming done by Piper and his team makes the operation of even the condo’s most sophisticated technological elements easy and intuitive: if the shades in a room are closed, for example, tapping the “Up” arrow once will raise the blackout shade but leave the translucent shade lowered. If the blackout shade is raised and the translucent shade is lowered, a single tap raises the latter. If both are closed, a double-tap raises them simultaneously. And the same logic applies in reverse, as well. “It all depends on the starting state of the shades,” Hopkins says, “so we have that logic built into the system so that it does what you think it should do. It just makes sense for people.”

As I said, it’s hard to imagine anyone ever wanting to leave this incredible condo. But in fact, Hopkins and his wife also have another home in another state and split their time between the two residences.

But even from four states away, Hopkins’ condo is never more than a press-of-a-button away. One of his favorite aspects of the Control4 system, he says, is its remote monitoring capability. With Control4® 4Sight with Anywhere Access service, he is able to keep an eye on the house and even control the lights and shades for guests when he isn’t there through his mobile device. The condo’s front door was outfitted with a contact closure, which sends Hopkins a text message alert anytime the front door is opened. And that happens quite frequently given that the finishing touches are still being put on the newly constructed space.

“There have been several times when I’ve gotten a ping that the front door was opened. Before I do anything else, I quickly fire up my Control4® MyHome app, peek at the security cameras, and then realize, ‘Oh, shoot, I forgot that the plumber was coming today.’ It just gives me great peace of mind to know that I can keep an eye on things, and that if guests or contractors come and go, the lights aren’t left running for four days and the shades aren’t open until we get back home.”